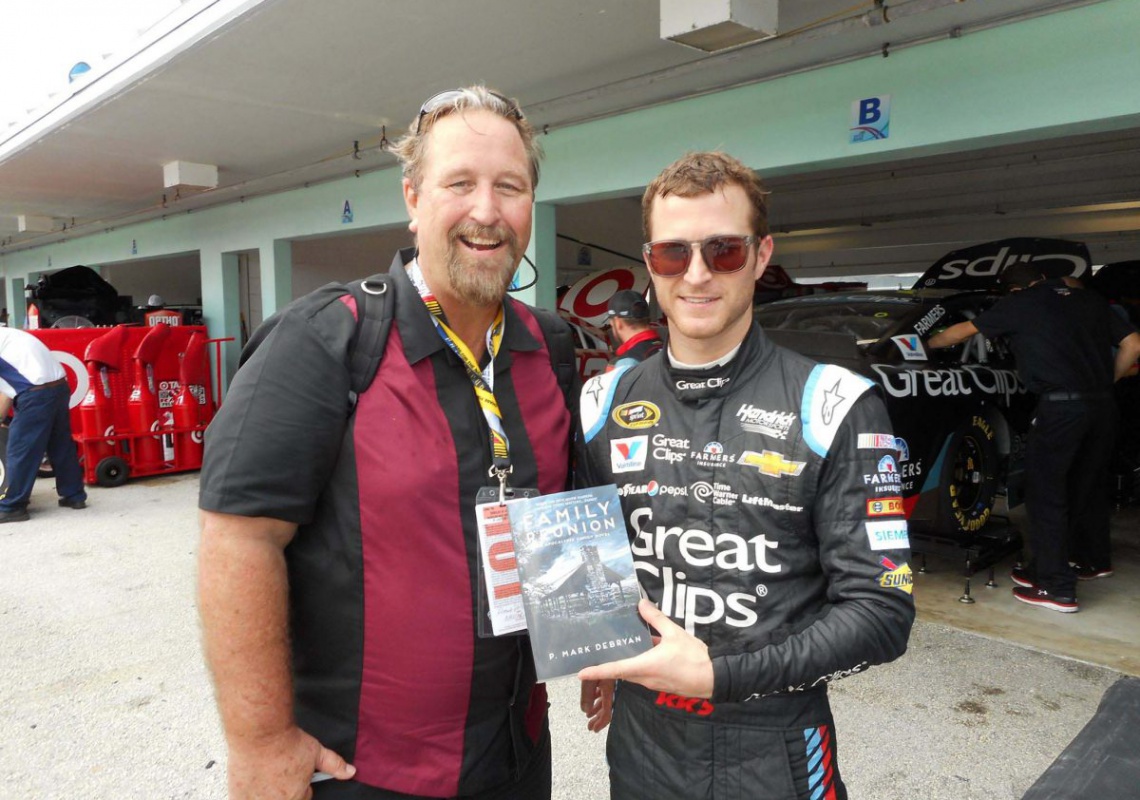 We first heard from P. Mark DeBryan in early 2015. Obviously a vivacious man and rising star, he told us about a book he was working on, a zombie apocalypse book to be exact. When he said he had a few technical questions, we were unable to resist talking coaches, especially within the confines of something this interesting, so he was immediately put through to marketing, who connected him with the best in engineering, design and production. The “Family Reunion: An Apocalypse Family Novel” is now a hit on Amazon as well as the halls of Marathon.

Within the first 60 days of its release, Mark’s book rose to number five on Amazon’s best seller list for its sub-genre and sold over 2,500 copies.

The author describes himself as a bit of a vagabond. Born in Washington and raised in California, he joined the Coast Guard soon after high school. During this first career, he was an Admiral’s driver in San Francisco, a deckhand on a 378-foot cutter in the Bering Sea and an aviation electrician in North Carolina, Texas and Southern Florida. After leaving the Coast Guard, he worked security, first guarding MX nuclear missiles, and then later a nuclear power plant in California. He eventually found himself enrolled in a Wisconsin college, only to drop out after meeting the love of his life, his future wife. Finishing college at the age of 36, went into business and then into publishing, before settling in as an information systems specialist. He currently splits his time between “West (by God) Virginia” and Surfside Beach, S.C.

Mainly set in the Pacific Northwest, Mark sets the break-neck pace of the book by the end of page one. The Brant family finds themselves en route from all corners of the U.S. to attend their family reunion in Washington State when a deadly flu epidemic becomes deadlier still. From family members to travel companions to the folks at Marathon Coach, anyone can die by the apocalyptic flu or by the monsters it creates.

“First let me express my gratitude to Steve, Pete, Miki and all the wonderful folks at Marathon for allowing me to include one of their creations in my book,” said Mark. “When I contacted them I had very few bona-fides other than a short story and a grandiose idea for a book. They not only agreed but Miki chased down answers and specs for me throughout the project. I remember distinctly wanting make sure that the improvements I was writing would be feasible in real life. After the sixth or seventh time I asked, ‘Hey, could we have this installed?’ the engineer told Miki, ‘Hey, it’s fiction right?’ But I really did research each one of the modification and still believe they are all within the realm of the possible, maybe not practical, but possible.”

The Marathon coach, which has proven popular among Mark’s readers, was inspired by one of Mark’s favorite celebrities – Jeff Gordon. Shortly after the book’s publication in September 2015, Mark hand delivered a copy to Gordon’s car hauler at his final race in Homestead, Florida.

“During the early stages of the research and outline for the book,” explained Mark, “I knew I wanted to add something that would be different. I am a huge Jeff Gordon fan and always coveted his Marathon Coach, so I contacted the company and asked if I could use their name in the book. Pete had Miki contact me and, well, the rest is history.”

However, the Marathon seems to be sparking the imagination of more than just the author. “One of my favorite comments from a reader is ‘I call dibs on the coach,’” said Mark. “I replied, ‘Sorry, I need it for the second book.’ But then the reader replied, ‘Sorry, Marathon can make you a new one; I called dibs on this one!’”

Mark formally introduces the motorcoach in the excerpt below: “In this scene, Maddie and Harry accept delivery of the coach,” said Mark. “It is purely my imagination, but every time I needed inspiration I would listen to Wagner and picture the majestic beast rolling out.”

Excerpt: DeBryan, P. Mark. Family Reunion (Kindle Locations 1575-1579). IPC.
“They went out a door to a large parking lot. Sophie took them about a hundred feet away from the building, then turned them around. A large roll-up door began to open and the outside speakers started playing Flight of the Valkyries. The custom H3-45 Triple Slide coach appeared like a bull entering the ring. Maddie let out a little gasp and was immediately embarrassed. Harry’s jaw loosened and he heard himself making a rather unmanly noise. Sophie was watching them, not the coach, and was grinning from ear to ear.”