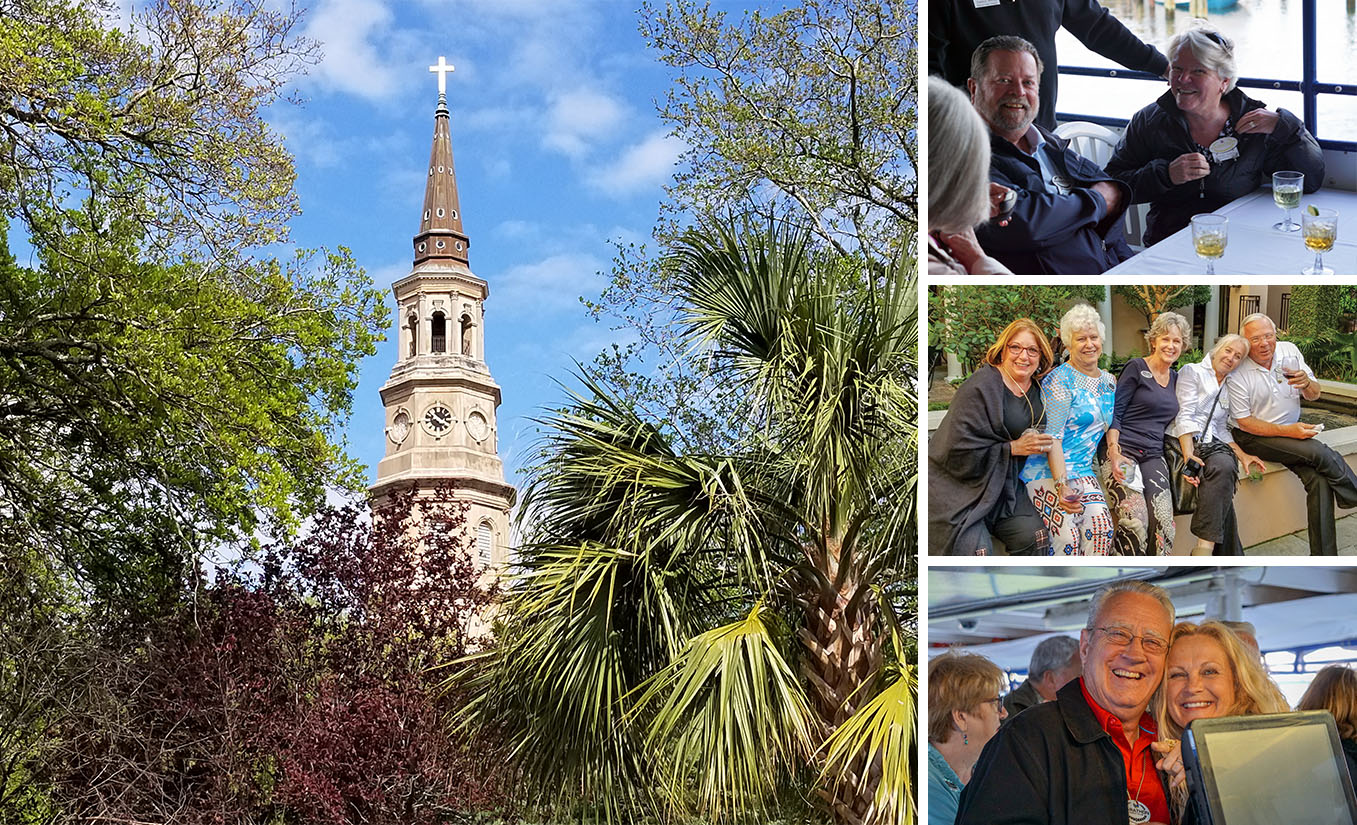 There are days that flow into one another with an ease and rhythm tailor-made for celebrating life. Marathon Coach Club’s “Charming Charleston” rally, held April 23-27, provided the kind of experience and backdrop for just this sort of journey. With a deep sense of place, Charleston provides a laid-back luxury rarely seen in the U.S., which may be one reason why it’s consistently voted the number one vacation destination in the country.

Late afternoon on Monday, April 23, the 14 First-Timers headed to their private social at the Mt. Pleasant/Charleston KOA’s Recreation Hall, where they met and visited with their Rally Buddies and Marathon Club Board Members. This lovely, well-tended KOA is nestled on the grounds of an authentic antebellum plantation. Slightly after 4 p.m., transportation buses arrived to take all attendees into Charleston’s French Quarter for a private social and dinner at High Cotton restaurant. Toasting with “The Charlestons” — a refreshing southern libation that features fresh brewed black tea, lemon juice, vodka, Madeira and more – the evening proved to be the perfect fit for this group’s undeniable appetite for life.

Those who chose Tuesday morning’s historic Charleston walking tour with Two Sisters Tours could smell the magnolias as they strolled along gorgeous streets and picturesque alleyways. Mary Helen Danzler and Therese Smythe — sisters and seventh generation native Charlestonians — led the groups while pointing out famous landmarks and telling tales of yesteryear. From Rainbow Row to St. Michael’s Church there was a visual feast of gardens, architecture, history and wrought iron. One item of particular interest was the “joggling board,” a long bench with springs that bounce those seated on it up and down. The attendees who saw Charleston by private bus today with Pineapple Tours and Lowcountry Legends were treated to ample history by the guides, as well as entertaining stories. They learned about the Battery, Church Street, antebellum mansions and horse-drawn carriages.

The private lunch at McCrady’s Tavern served reimagined American classics with a side of history. On the National Register of Historic Places and built in the second half of the 18th century, McCrady’s was a focal point of social life in Charleston following the American Revolution. After the substantial three-course meal, many went upstairs to visit the tavern’s historic Long Room. Completed in 1788, this room was an entertainment hub for Charleston’s elite, even hosting a banquet for President George Washington in 1791.

The evening brought more feasting as attendees enjoyed a delicious dinner on their private cruise in Charleston Harbor aboard the Spirit of Charleston with SpiritLine Cruises. It only took moments for the city’s dazzling coastal setting to become front and center, framed with the laughter and merriment of friends. With the music styling of local guitarist Dave Landeo, cocktails, breathtaking sunset and unrivaled views of the Arthur Ravenel Jr. Bridge, the night took on a timeless sheen, the kind of which lingers in the memory. 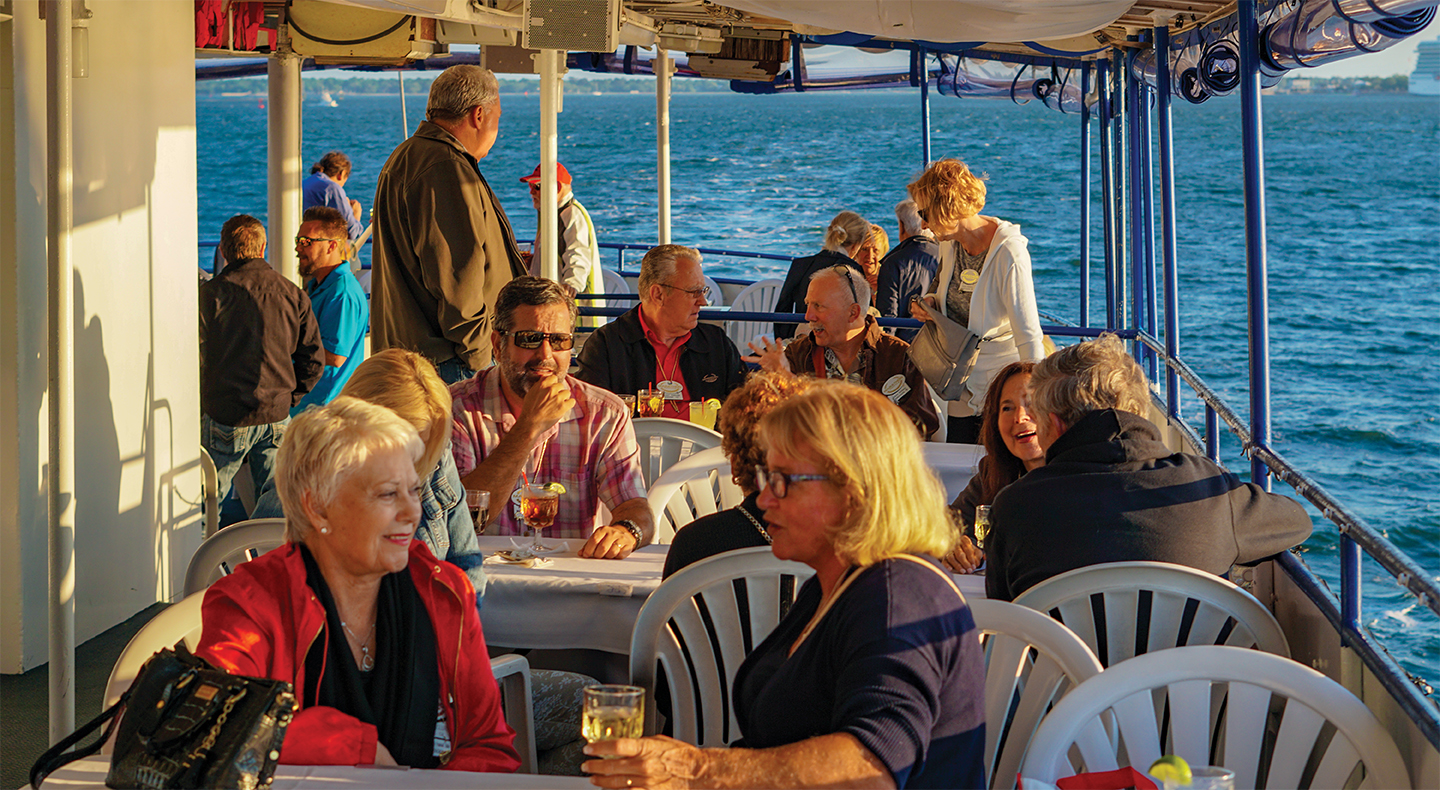 After Wednesday morning’s TechTalk, led by Marathon Florida Service Technician Jamie Gard, it was time for the Magnolia Plantation and Gardens Experience. One of the top 25 most visited historic houses in America, this plantation has been in the Drayton family for 13 generations. Marathon Club members enjoyed guided tours through the house and a nature train ride through the plantation. Many snapped photos of lazing alligators, sunning turtles, watchful herons and even an enthusiastic egret devouring a frog as the train shimmied along the trails. Afterward, attendees were free to explore the expansive grounds — the romantic-style gardens, Audobon swamp garden, zoo and nature center — and to peruse the well-stocked gift shop.

Next on the agenda of southern fun was lunch at The Early Bird Diner, of “Diners, Drive-Ins and Dives” fame. Closed to the public for the afternoon, attendees filled the booths and tables, partaking in the best pimento cheese around and pickles fried to golden perfection. True southern fare abounded with chicken and waffles, shrimp and grits, and catfish po’ boys as some of the favorites. Wednesday evening, a couple dozen attendees burned off some of those decadent calories playing in a disc golf tournament. With their Marathon Club logoed golf discs in hand, this adventurous group took the short walk to the campground; beginner-friendly nine hole course, received instruction and were put into foursomes. For the next hour or so discs were tossed, some trees inadvertently hit and a few “pars” even achieved. Laughter was heard throughout the course, making it clear that disc golf and the Charleston rally attendees were a very good fit. 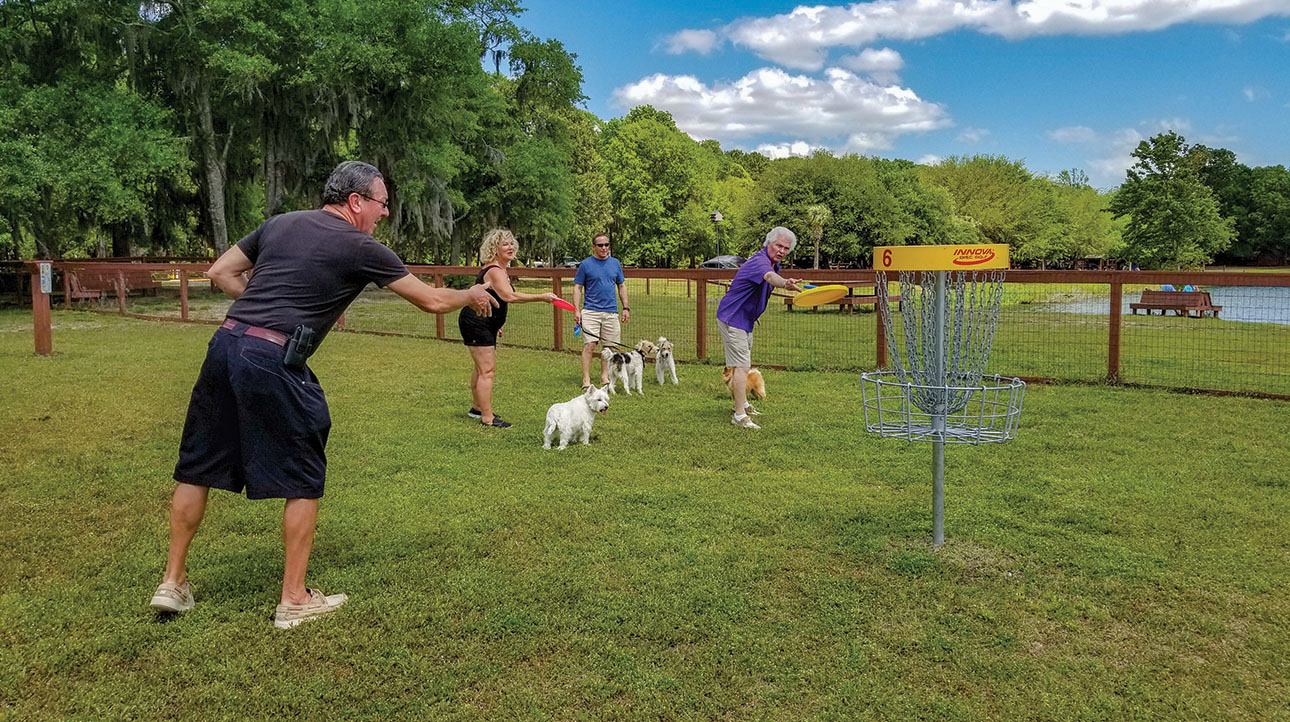 After a hearty private breakfast at the Charleston Grill bright and early Thursday morning, attendees were ready to delve into American history. For years, Fort Sumter has provided a glimpse into the Civil War, with the infamous first shot of the Civil War ringing out on April 12, 1861 from this National Monument, which is perched on a small island in Charleston Harbor.

Thursday night’s family-style dinner took place in a “Travel+Leisure” favorite — The Grocery. A rumble began from the first course as people were smitten with the cornmeal dusted oysters, the roasted, raw and pickled beet salad, and the wood roasted spring vegetables. Also popular were the low country seafood pilau and the sorgum glazed pork roast. Banana pudding parfaits and peanut butter bars with hot fudge sauce and pretzel crumble rounded out this night’s delicious meal. 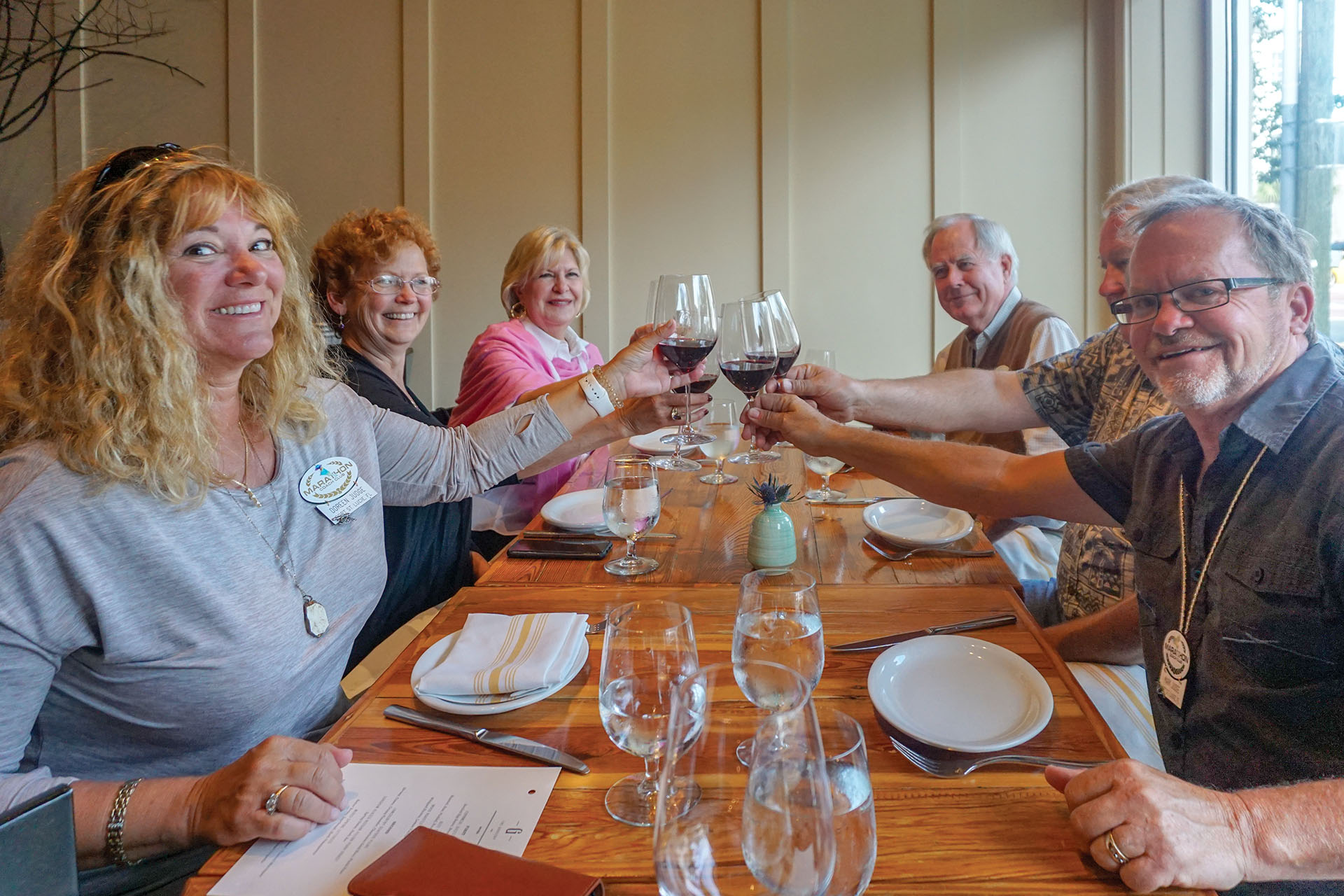 For many, Friday morning brought more food with the “Savor the Flavors of Charleston” walking food tour. This tour found attendees talking, walking and tasting their way through the city while enjoying stone ground grits, southern mac and cheese, southern pralines, sweet tea, collard greens and fried green tomatoes. Sprinkled throughout the tour was history about the food and the area. The other offering today was the Black History/Porgy and Bess experience with Sites and Insights Tours. From stops at places such as the Old Slave Mart Museum, Catfish Row and Emanuel AME Church, attendees learned about Gullah/Geechee African culture in America, which has sustained itself for more than 100 years. It was this culture that was instrumental in the creation of George Gershwin’s opera, “Porgy & Bess,” which was based on native Charlestonian and writer DuBose Heyward. To know American history is to know South Carolina history, and to know South Carolina history is to know Gullah/Geechee history.

And just like that, it was time for the private elegant social and farewell dinner at Planters Inn’s enchanting Peninsula Grill. Touted as “the very heart and soul” of Charleston’s Historic District, from passed appetizers in the magical courtyard to the last slice of coconut cake served in the “Garden Room,” Friday’s dining experience was filled with southern charm and friendly encounters.

With its prime coastal setting, historic architecture, creative energy and vibrant dining scene combined with friends new and old, the “Charming Charleston” rally was not a mere vacation, it was an exquisite adventure.