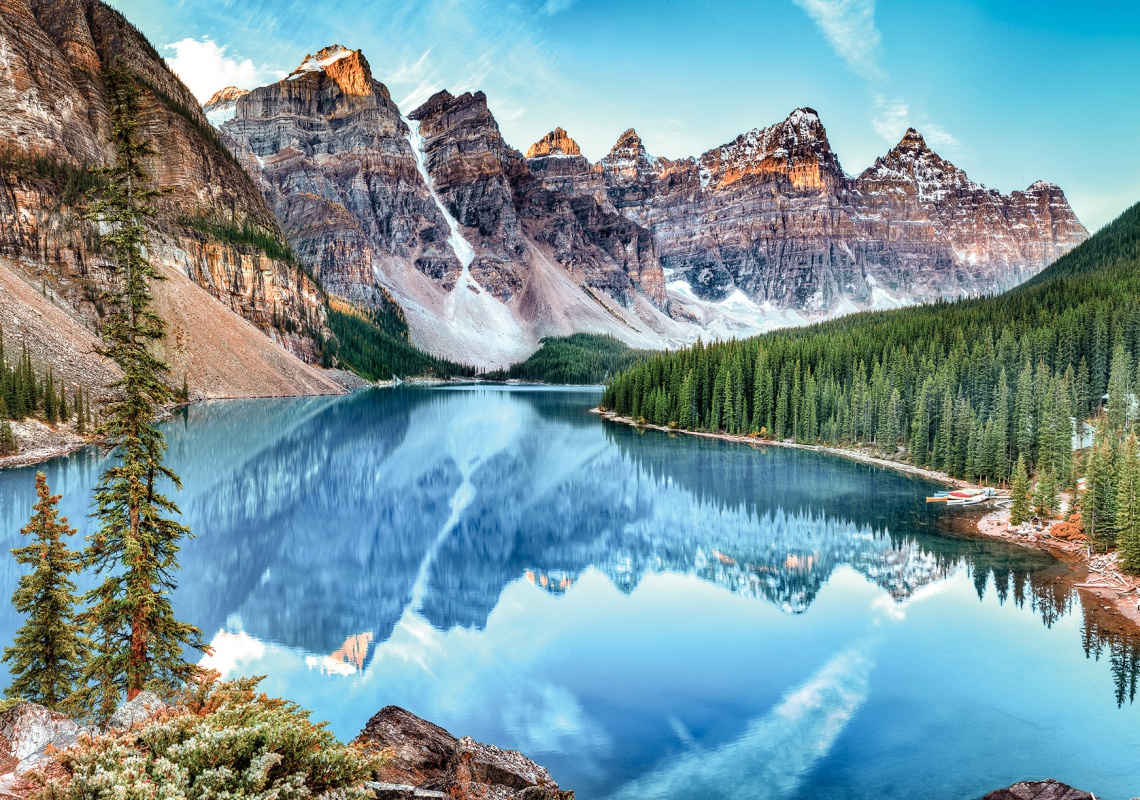 When Murray and Nathalie Sielski embarked on their Prevost conversion journey, the Canada-based couple had a plan.

“For my 40th birthday, Nathalie and I took a five-day backcountry horseback ride in Banff National Park,” said Murray. “No lights, no electricity, no phones. It was the perfect chance for us to have long conversations about where we wanted to be in 10 years and whether it was our time to make some plans for the future. Five nights under the stars in Banff resulted in the decision that we were going to work hard and do everything in our power to retire at 50, buy the motorhome and hit the road, traveling to every bit of North America that intrigued us.”

That flash of insight soon led the couple to an FMCA rally in Bend, Oregon, as even though they had a solid knowledge base due to extensive research, neither of them had seen a Prevost conversion in person.

“We attended an RV show in Oregon in 2010, where I was introduced to the Prevost way of luxurious motorcoaches,” said Nathalie. “Having never seen them before, Murray had me going through all the other class A motorhomes first – keeping the créme de la créme viewing for the end. Once I toured a few Prevosts on display at the show, I was sold!”

In addition to touring Marathon coaches, they also sought out experienced Prevost owners at the rally so they could learn the truth about owning a bus conversion. “We were lucky that we met some lovely owners and had a chance to chat for a couple of hours,” said Murray. “We left the conversation with the advice to not rush, but to take our time and find the right unit that would last a long time – a truly buy-your-last-bus-first. We took that to heart and got to work on turning all of our future plans into our reality.”

Marathon Sales Representative Rick Mount, who was attending the rally, invited this gregarious couple to tour the World Headquarters in Coburg, Oregon, the next day. “It really was the plant tour that sealed our decision to buy a Marathon,” said Murray. “After seeing the level of craftsmanship, attention to detail and dedication to putting a quality product in use, it solidified our decision even more that it was a Marathon that we really wanted.”

With this decision made, the search was on. “Our budget would not allow a new bus so we were on a mission to find just the right Marathon, at just the right price and at just the right time to make our dream of traveling North America come true and have the photos to prove it,” said Murray.

But what were they looking for? Something relevant to their lifestyle, familiar and extraordinary.

“My vision for what my coach should look like was probably very different than what Murray was looking for initially,” said Nathalie. “If I was to travel and live in this bus for several months of the year, it wasn’t going to look like a van down by the river! It had to have all the comforts of home and it had to reflect our lifestyle. I would say our style is quite contemporary and color preferences leaned more toward the blacks and the grays – colors hard to find in the RV arena, as most tend to be a blend of browns.”

As Murray and Nathalie neared their preplanned retirement date, they kicked things into high gear by attending the Prevost Motorhome Expo. Although they didn’t find a coach that completely fit their lifestyle, they left having a clearer vision of what they wanted in the long run.

“At the time, I was religiously looking online at the inventory that was available and would show Nathalie coaches every couple of days,” said Murray, “but we didn’t see anything that really jumped out at us. Then on a Friday afternoon, a new consignment was posted on Marathon’s site and we had found our coach. Kasey Hess worked with us to get all of our questions answered. He ensured we had all of the details and went out of his way to make sure we were making an informed decision.”

With their best interests at heart, Kasey felt confident that the couple had found their ideal match – the base in which to make their dream a reality.

“I had only been selling for Marathon for a few weeks,” said Kasey, “so I was pretty green. We came to an agreement and they had a list of changes that they wanted made. At some point, someone in Oregon told them it was my first coach sale so they made it ‘a big deal’ for me. I still have the plaque on my wall that they made for me that says ‘First Marathon Sale.’ They are such great customers and I am so glad that they were my first!”

When they arrived in Coburg, Marathon Coach Sales Representative Rod Johnston welcomed them and showed them the coach. They found the pre-owned motorcoach an even better fit than they originally thought and had immediate ideas for renovations to make it their own.

“Rod took us under his wing and treated us the same as if he had been our salesperson,” said Nathalie. “He introduced us to the Marathon family and made us feel welcome. The initial photos of “Sully,” viewed on the internet, looked promising. The color palette from the photos was more of a light gray and cream or oatmeal color as some would say, but once we flew out to Oregon to personally inspect the coach, the colors were much richer than initially seen on the computer. After looking for 10 years for one that fit our style, it was hard not to think of Sully as our own once we found it.”

In Oregon for only a matter of days, after inspecting the coach, they took a few hours to simply sit inside, observing the level of detail and sophistication already present, while considering the inspired possibilities – strategically mapping a direction to make Sully their own.

“Some of the changes were a necessity as the plan was to be able to work from our coach during our last work years, while others were cosmetic changes that we felt would modernize the coach and accentuate some great design elements that were already there,” said Murray. “The goal was to take the entire coach and turn a 2005 into a 2018.”

Sooner then they initially imagined, they were ready to put ideas into action.

“In our brief initial visit to Marathon to see the coach, we were introduced to Brenda from the design team,” said Nathalie. “This was all unscheduled really, but Brenda was more than willing to fit us in and go out of her way to quickly find us samples to look at for our renovations. We were only there for two full days, and in that time we were able to pick out hardwood and shower/sink tile for our coach. She even found us the 2005 calendar in which our coach was showcased and gave us the complete initial design palette from 2005 along with old photos that we could keep. Being the second owner of this coach, it was nice to be able to see how Sully had come along over the years.”

“Brenda spent a lot of time asking us questions and figuring out ‘our style’ and how to best reflect that in the changes we wanted and how to integrate these things into the existing décor,” said Murray. “One of the most memorable things we discussed with Brenda was that we didn’t want to end up with a ‘dog’s breakfast.’ She laughed at us with our Canadian lingo to describe when a reno looks like it was just a bunch of things thrown together with the hope it would all work out in the end. She assured us that we would work together to make sure it wouldn’t look like that, and no one would know it had been renovated. She took the time to show us how the previous owners had already changed some things in the coach to suit them better, so we felt confident that Marathon would be able to deliver on our expectations.”

With a shared passion driving everyone involved, even in the short time frame, the project continued to take shape.

“Brenda went above and beyond to suggest things that were new to her, as she had been sourcing the latest materials from suppliers the previous day,” said Murray. “The suggestions that she brought were a perfect reflection of our wishes. It was the ideal marriage between the existing interior design and the updating of a few things so that anybody who would see
the coach would never guess that it was 13 years old.”

With the groundwork in place, it was time to meet with Service Manager Chris Welch about this contemporary overhaul.

“Chris did a really great job of walking us through the costs of doing it and in the end we felt really comfortable with our decisions,” said Murray. “We were excited that our new-to-us coach would become ‘our coach.’ Timelines were discussed and we jetted off back home for the agonizing wait until we could get back to Coburg to pick up our bus.”

Time and resources well spent, and rivaling coaches coming off the production line, Sully dazzles. In fact, the couple is constantly asked if their coach is a 2020.

Murray and Nathalie’s list all of the renovations completed with Marathon Service since purchase:

Visit Us and Take in of the Wonderful Attractions Nearby As we enter high season at our Florida location, we feel …
Social media & sharing icons powered by UltimatelySocial