A Commitment to Our Veterans | Marathon Coach
Lifestyle Articles 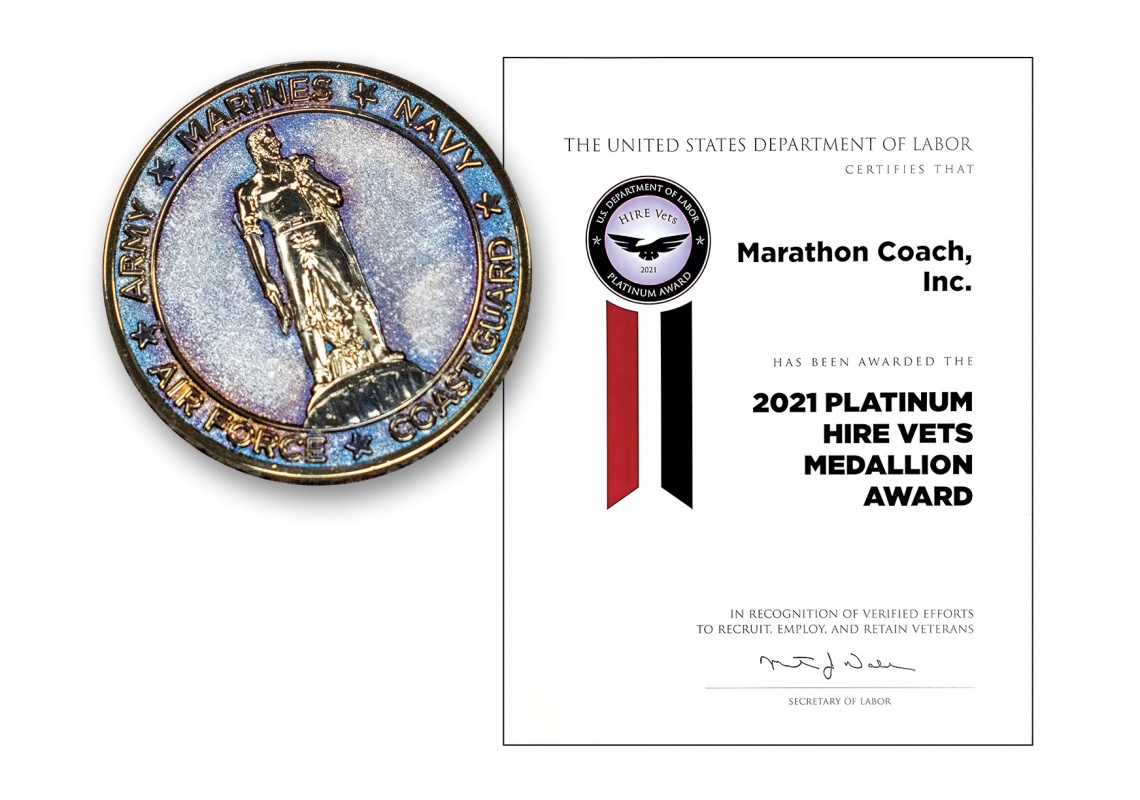 The value that the Marathon family places on the men and women who have served our country is clear, often revealing itself at events and rallies when we visit historic monuments and honor the sacrifice of others. That respect is also evident on the production floor at Marathon Coach, and the reason we are proud to be a recipient of the HIRE Vets Medallion Award for 2021.

The HIRE Vets Medallion Award recognizes a company’s efforts to further the employment and professional development of United States veterans. It is the only program on the federal level that honors this commitment to those who have served in our nation’s military. In November of 2021, Marathon Coach received the Platinum medallion – the program’s highest honor for a midsize company.

The program came into effect when The Honoring Investments in Recruiting and Employing American Military Veterans Act of 2017 (HIRE Vets Act) was enacted, allowing the U.S. Department of Labor to recognize companies that excel in the recruitment and retention of employees that are veterans.

Robert Peel, a veteran of the United States Air Force and Marathon’s Safety and Training Manager, has worked to set up lines of communication with the local Department of Veterans Affairs in order to attract veterans to Marathon’s workforce. Robert has several contacts at the V.A. One of them is the Employment Coordinator for U.S. Army Veterans, Shak Emily, who works out of the regional V.A. employment office in Portland, Oregon.

“Shak will call me and say he’s got a guy looking for a job in the Eugene/Springfield area, and do I have anything available?” said Robert. “When they come in, I chat with them, give them a T-shirt and then I keep in touch with them. We let them know we have a company here that will work with them.”

Another one of Robert’s local contacts is Bill Hogan, a Marine, who does vocational rehabilitation training at the Veterans Benefits Administration in Eugene, assisting military veterans with transitioning back into civilian life. Bill might, say, arrange for candidate to go through a training program to obtain or enhance a skill set needed for Marathon to hire them.

This one is personal for Robert. Four years ago, when he was first employed by Marathon in the Service Department, he was assisted by Service team leaders Chris Welch and Kurt Nelson to get started with his training. “Kurt and Chris gave me the list of tools to do my job in the Service Department,” Robert recounted. “I gave that list to the V.A., and the V.A. purchased and shipped them for me. They came right to the door. And Chris helped unload the truck.”

It’s this spirit of cooperation and care, in addition to the numbers of veteran employees and their tenure at Marathon, that truly makes Marathon Coach a veteran-friendly place. On-the-job training provides ex-military applicants with new avenues for employment. Robert’s own son, U.S. Army veteran Robert Peel III, is a recent recipient of this vocational training. 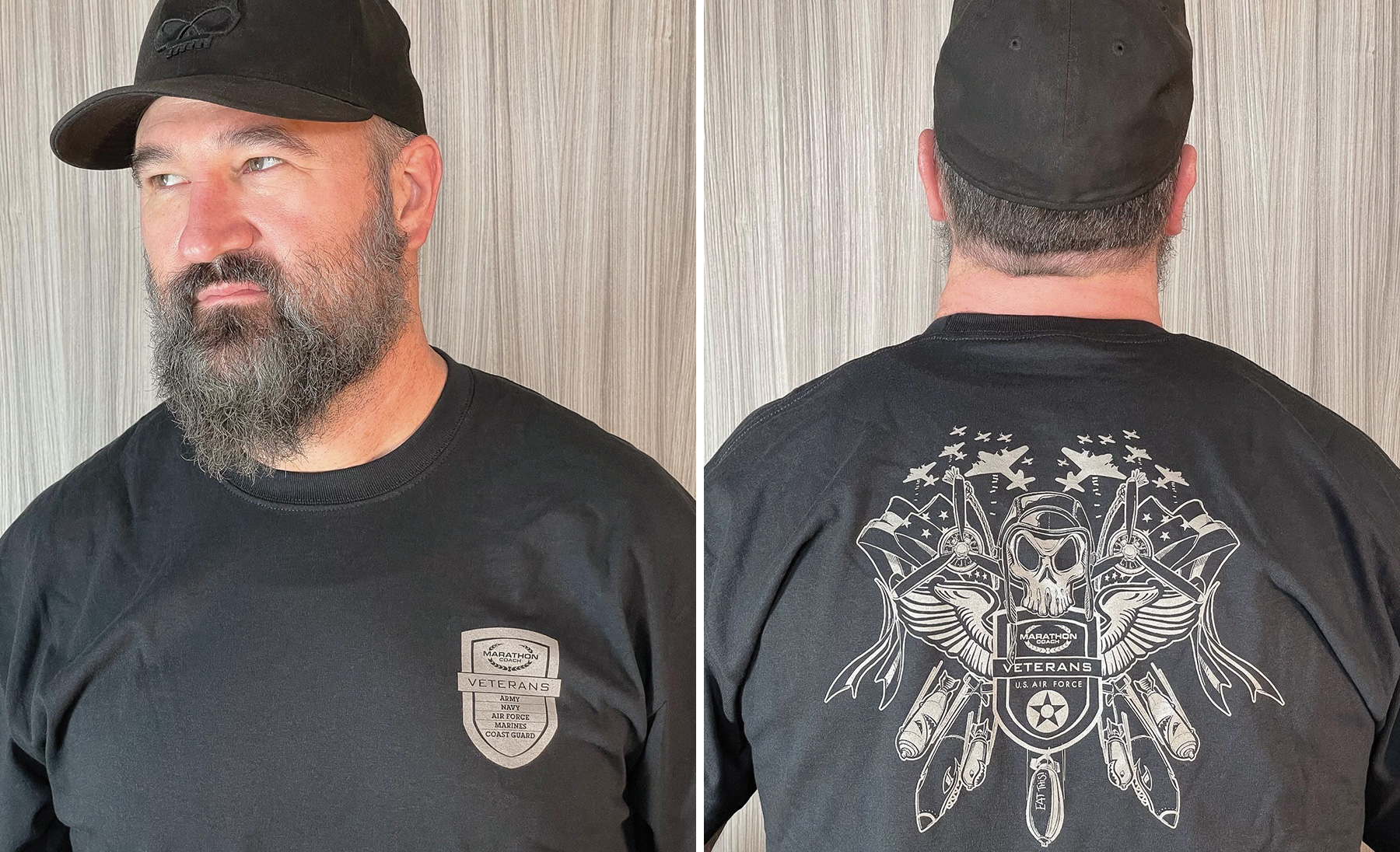 Robert Peel III was a fire control specialist, directing laser-guided munitions to safely detonate targets, such as improvised explosive devices, or other battlefield targets. “Obviously, we’re not going to be asking our veterans to blow things up,” laughed his father. “We’re willing to work with people and train them as needed, and that’s a unique situation for the vets coming out of service, getting set up with work that is not necessarily what they did in the military.” Robert Peel III successfully completed training at Marathon and has been working in the cabinetry department for eight months.

Robert, Sr. likes to stay on the radar of the local and regional recruiters. For example, Sgt. Samantha Bray, Marketing/Communications Director for Recruiting in Portland, Oregon, hangs posters and flyers to help direct job candidates to Marathon World Headquarters in Coburg, and lets them know Marathon is a veteran-friendly organization.

The integration of new, ex-military hires doesn’t stop at the point of hire. Once a veteran is employed, there is an “area representative” – really, just a fellow veteran volunteer – that is available for assistance in every department at Marathon. These area reps are accessible and enthusiastic, ready to talk through any issues.

“Military vets always have a common ground where they can immediately hit it off and start talking, whether it’s their branch, or career field, or just talking smack about each other’s service,” said Robert. “In case [new veteran hires] have any questions or problems getting adjusted to civilian life, there’s this person they can talk to.”

At the time of publication, Marathon Coach employs 24 veterans, from every branch of the military except the Space Force, with more expected as Robert Peel continues his voluntary outreach efforts. Marathon is honored to be a recipient of the 2021 Platinum HIRE Vets Medallion from the U.S. Department of Labor, and our efforts to support U.S. ex-military, as they reintegrate after serving their country, will proudly continue.

Visit Us and Take in of the Wonderful Attractions Nearby As we enter high season at our Florida location, we feel …