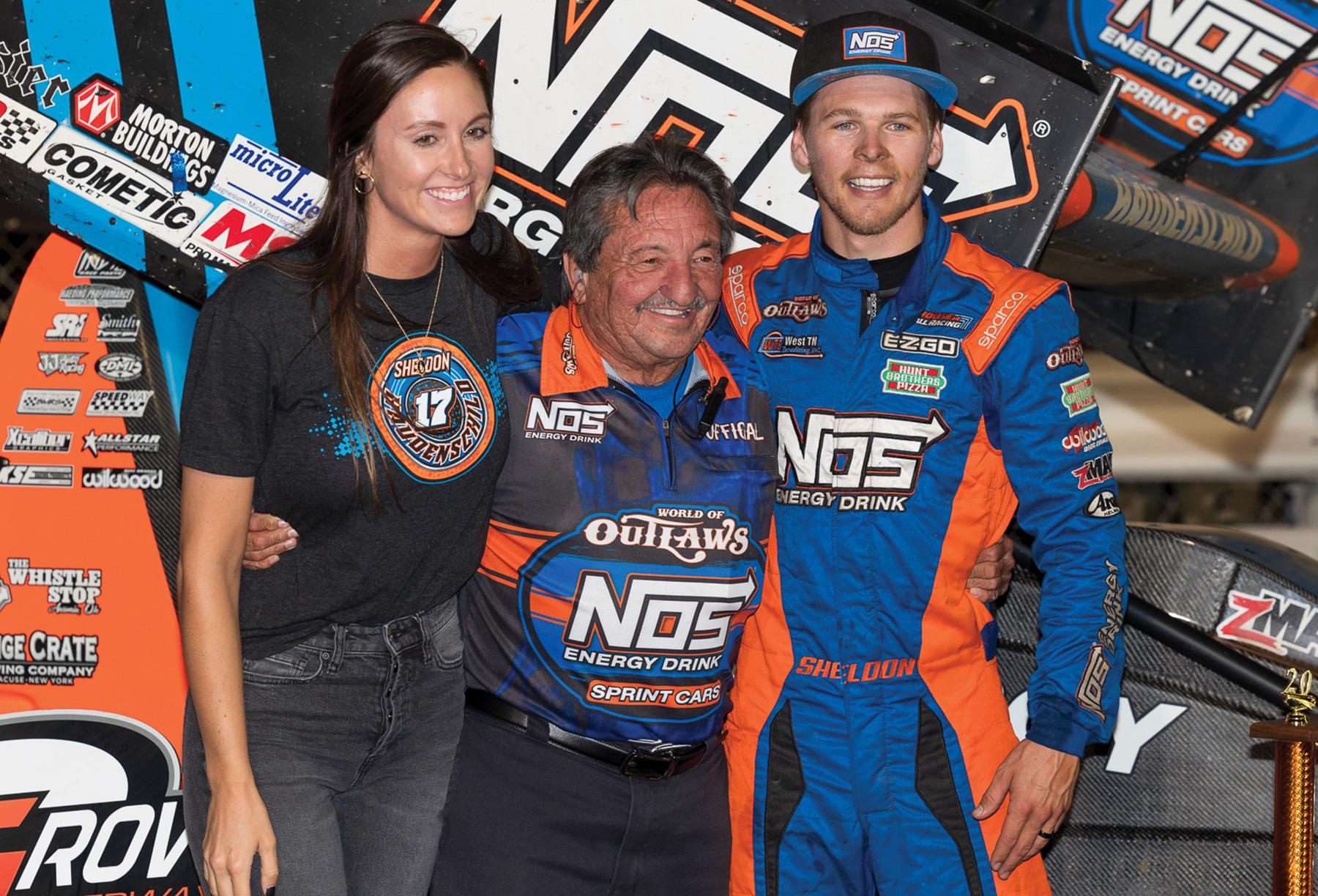 In his capacity as Head of Timing and Scoring for the World of Outlaws Sprint Car Series, Eloy Gutierrez is a celebrity in the racing world. It’s his innovative spirit, after all, that to this day enables both live audiences and TV viewers alike to easily follow and understand the supercharged action they are witnessing on
the track.

Born and raised in Albuquerque, New Mexico, Eloy grew up listening to the Indy 500 on the radio, following drivers like Al Unser, Sr. and Gary Bettenhausen. Albuquerque was something of a sprint car racing mecca at the time. “There was only one racetrack for several years, Speedway Park there in Albuquerque,” Eloy recalled. “Then in 1968, two guys broke loose and built their own track – Albuquerque Raceway. Also, the Unsers were there. That played a big part in the interest in Albuquerque.”

After high school, Eloy enrolled in Albuquerque Technical Vocational Institute, and a year later received on-the-job training as an electromechanical design draftsman at Sandia National Laboratories in Albuquerque, a company that specialized in safety and reliability protocols for components of nuclear weapons systems. It was at Sandia that he first met co-workers who were also drivers on the dirt track racing circuit. 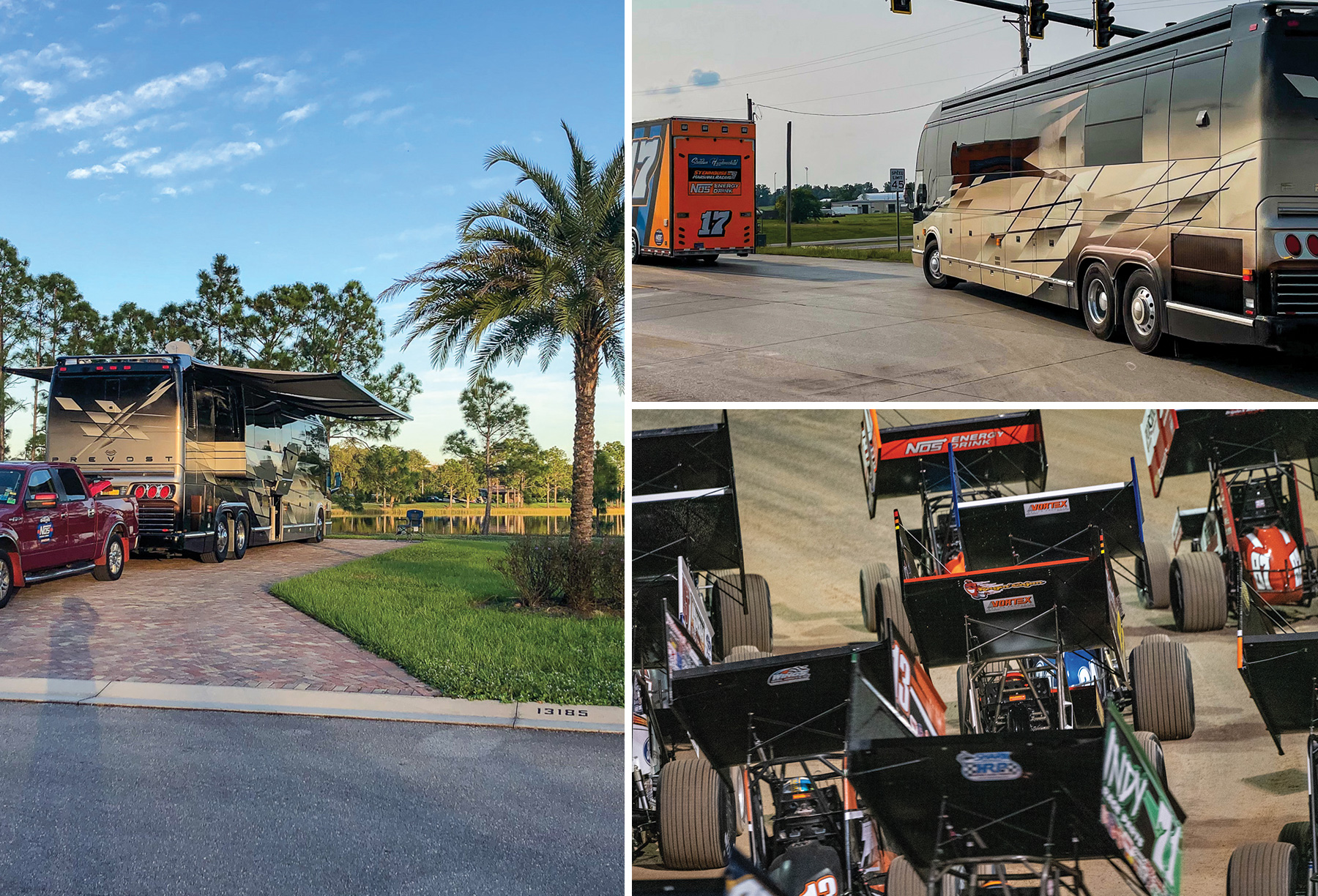 “Several members of the New Mexico Motor Racing Association worked at Sandia, not just in a driving capacity, but officials,” recounted Eloy. But it was the drivers that really drew Eloy into the world of sprint car racing. He continued, “The sprint car drivers that I met … that’s where I was really star-struck. What they do in those race cars is just phenomenal. If you talk to anyone that is a die-hard sprint car fan, they’ll tell you the same thing.”

The following year, he accepted a position as a corner flagman – this was the beginning of his direct involvement with sprint car racing. “Now I didn’t have to pay to enter,” laughed Eloy. “I could just sign in.” But it was obvious he got involved for the love of the sport – by 1975, Eloy was promoted to Chief Flagman for the NMMRA.

In what Eloy calls the “heyday” of his time at Sandia Laboratories, 1976 to 1984, he was in the Microelectronics Department, working with integrated circuits. During this time, he met and befriended B.D. Shafer, an electronics engineer. Eloy gets emotional when he talks about B.D., who passed away in 2018: “B.D. was the smartest engineer I’ve ever worked with.”

50+ years ago, when Eloy was still a corner flagman for the NMMRA, race timing and scoring was a paper-and-pencil endeavor. But during his tenure at Sandia, along with B.D., Eloy tested and implemented the very first electronic timing and scoring systems at dirt tracks all over the country. “B.D. had an interest in racing as well,” said Eloy. “That relationship and that partnership is what took us to Dallas in 1997 with a proposal.”

That was when Eloy and B.D. approached World of Outlaws founder Ted Johnson to sell him on implementing their electronic timing and scoring prototype on the circuit. Asked about the nerve-wracking prospect of that meeting with Ted Johnson, Eloy said, “It was tough. Ted was very old-school. But he accepted the technology pretty quickly when he saw the accuracy it provided and the quickness of how we could do things like generate line-ups and information.”

Flushed with this initial success, Eloy entered a frenetic 1998. He and B.D. were still working at Sandia and traveling to racetracks to implement their new electronic systems. “At this time, I had a fifth wheel and a Ford pickup,” said Eloy. “That was our living situation. We were driving to race tracks all over the country.”

Later on, in 1998, Eloy and B.D. worked with the national cable network TNN to link the timing and scoring feed to the TV feed. That first timing ticker you saw on those dirt track races on TNN? That was Eloy. “The first time I saw that, I cried,” he recounted. “What we did is going out on national TV? I thought: This is so cool! That was huge for us.”

B.D. Shafer retired in 1999, but Eloy continued on with their work, taking his electronic timing and scoring efforts into a new millennium. In 2007, Eloy retired from Sandia and began a full-time career with World of Outlaws. He would now attend all the races on the schedule, handling timing and scoring duties. This also marked the beginning of a full-time, on-the-road existence for Eloy.

After owning several fiberglass RVs and living in them nearly year-round, Eloy made the jump to a Marathon in 2017 and never looked back. “Had I known then what I know now,” he said, “I probably would have owned a Marathon much, much earlier.” He is the second owner of Marathon Coach #0981, a 2006 H3-45 triple-slide. “Yes, one can find a luxurious look in a fiberglass coach,” he continued, “but the luxury will be shorter-lived, due to the lack of house-build quality and the inferior ride, as compared to a Prevost ride. Especially when subjected to the number of miles our racing series compiles!”

Spending the last half of 2017 learning about bus conversions, and driving on I-5 past Marathon Coach World Headquarters in Coburg, Oregon, many times, Eloy would peruse the beautiful coaches on display in the lot. After hearing from a friend about a 2006 H3-45 Marathon that had become available for sale, Eloy jumped at the chance to take a test drive with a Marathon representative. “Wow!” Eloy gushed. “Now, this is the honest truth: I drove about three miles and looked over at him and told him ‘I want it. We have to make this happen!’ For anyone that has driven a Marathon, you understand. For anyone that never has, be prepared for the driving experience of a lifetime.”

For nine months out of every year, Eloy crisscrosses the United States in his Marathon coach, averaging 35,000 miles per year. “Having your home at the racetrack, and not having to deal with logistics that some of our other officials deal with, is a major advantage,” said Eloy.

A typical day in the life of Eloy Gutierrez: driving 200-300 miles to the next track (sometimes for multi-day events) and setting up/tearing down/testing timing and scoring equipment. Eloy professes he simply could not do his job with the burden of flight reservations, hotel accommodations, rental cars and other logistics bogging him down. “Regardless of where I stop at the end of the day, when I run my slides out, voila, I’m home. So much storage and all the comforts of home. I don’t have to unpack anything. My refrigerator is stocked; I have more TVs per square foot than most homes; In-Motion satellite for listening to music while driving; and the HD dish for stationary situations. Having plenty of fresh water, as well as wastewater capacity, is a huge plus.”

Eloy continued, “Having a 20-kW generator with auto-gen start is simply awesome. [I have] plenty of electricity for those days that require running all four ACs. Having that escape from a hot day is very helpful. Not having to return to a hotel … once the race-day work begins, there is literally no time to go anywhere. My equipped tool bay with necessary backup and testing equipment is a must. All these things and many more provide comfort and certainly allow me to relax, knowing that I can address just about any timing and scoring issue that may arise.”

Ever since his purchase, Eloy has been impressed with the reliability of the Prevost chassis and the comfort of the Marathon house build. “The demand for beauty and quality and reliability, in both house and chassis functions, must fall second to none,” he said. “Marathon meets that standard.” And when service needs arise, Marathon’s service centers conveniently span the country in Oregon, Texas and Florida. “I have used all three Marathon service centers,” said Eloy. “Marathon Texas is probably the most centrally located to our racing tour travels.”

Eloy has upgraded his beloved coach several times. In addition to completely reimagining his original table-and-chairs setup to be a modern, custom-designed, bar-style dinette with window-facing stools, he has added an enviable home theater to his master suite and also upgraded his plumbing system. Eloy admits he’s particular about the changes he makes. “That’s one of the things over the years that I really have enjoyed – every technician that I have ever worked with [at Marathon], they appreciate the input and feedback that I give them.”

Until just a couple of years ago, Eloy worked at a feverish pace for World of Outlaws, generating race lineups, setting up qualifying orders, conducting the actual competitive timing and documenting race results. He has since trained a replacement in these capacities, and his role now is overseeing the systems he spent decades putting in place, all the while providing technical support and general expertise. People often ask him if he’s thinking about retirement.

“No, I am not retiring,” he said. “I’m going to do it until I can’t anymore. As long as I can manage my Marathon and get up and down the highway, I’m good to go.”

Visit Us and Take in of the Wonderful Attractions Nearby As we enter high season at our Florida location, we feel …

Take a Marathon for a spin! Although steeped in the traditions of old-world craftsmanship, Marathon Coach keeps innovation and bright ideas …

Hitting the Links in Luxury

Marathon Coach Texas Service Manager Chris Lewis and his knowledgeable team are passionate, highly trained and completely committed to your …

Luxury RVs dotting the highways and byways of North America may look similar from the outside, but it’s often what’s …

By Dennis McBride, Marathon Representative – Marathon Coach Texas As a golf enthusiast, I am very excited that the PGA of …
Social media & sharing icons powered by UltimatelySocial