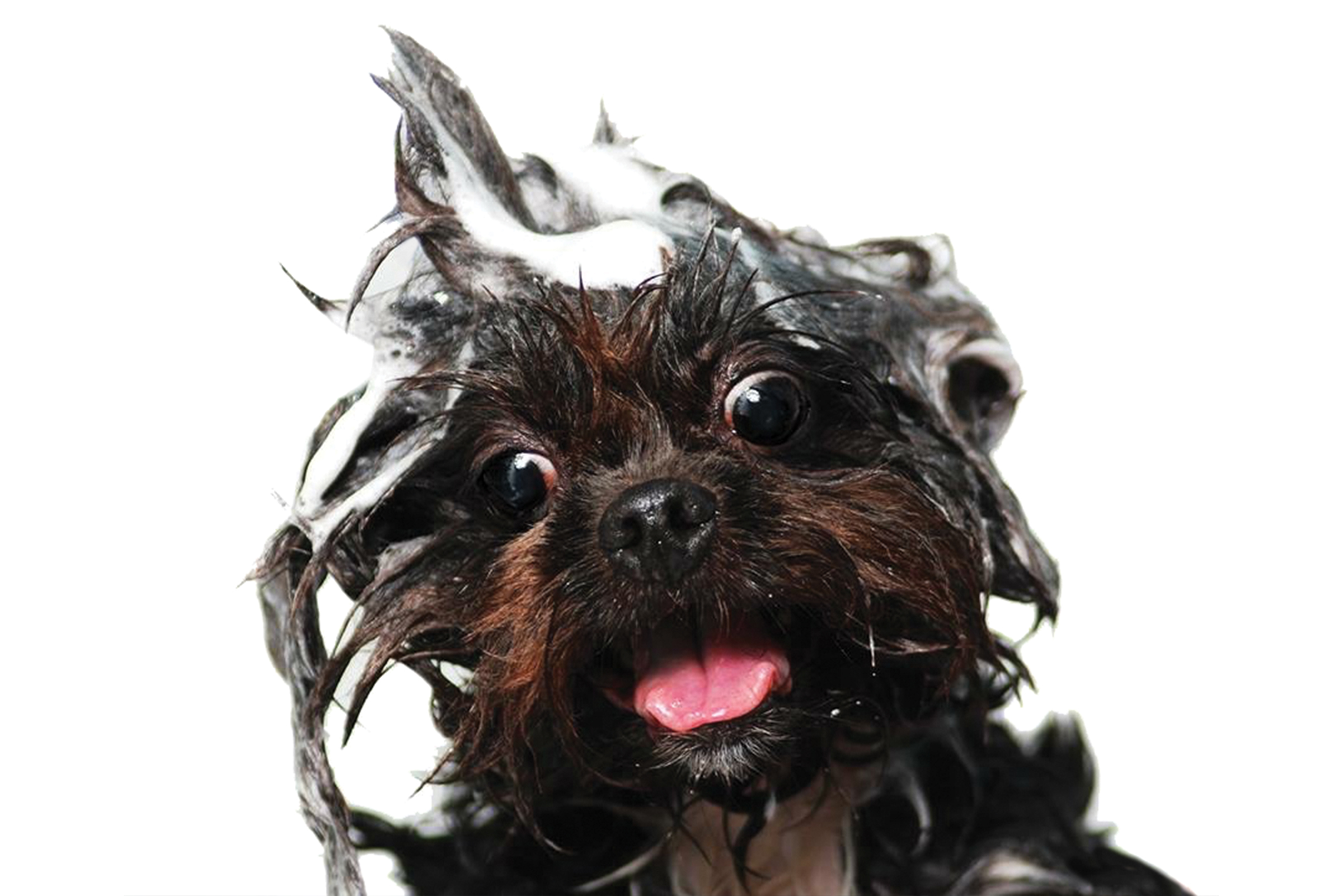 Marathon Coach is proud to be a pet friendly establishment, where pets are welcome to play, rest or nap with you during your stay with us. However, as much as we love visiting with these furry wonders, we know that just like you, they too love life on the road. 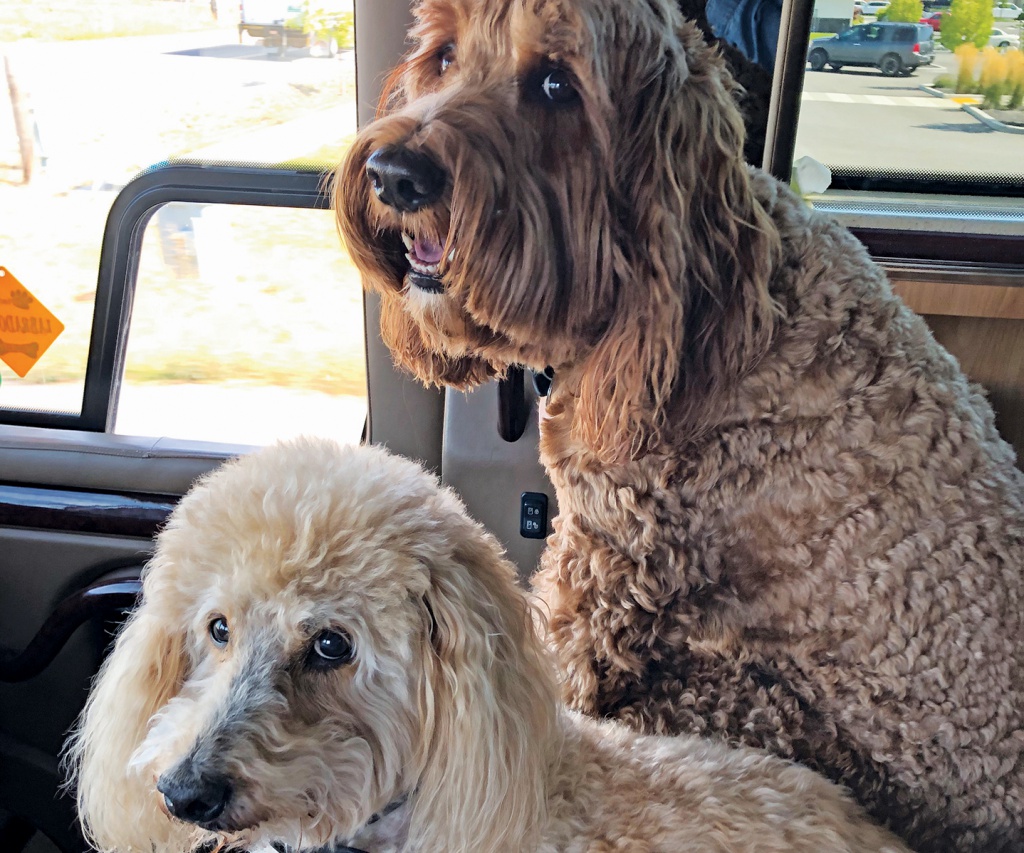 Sparky (the six-year-old redhead) and Sydney (the 13-year-old blonde) take over the copilot seat: They love to travel in our XLII Marathon.
– Wayne and Sandy Beck (Marathon Coach #1037) 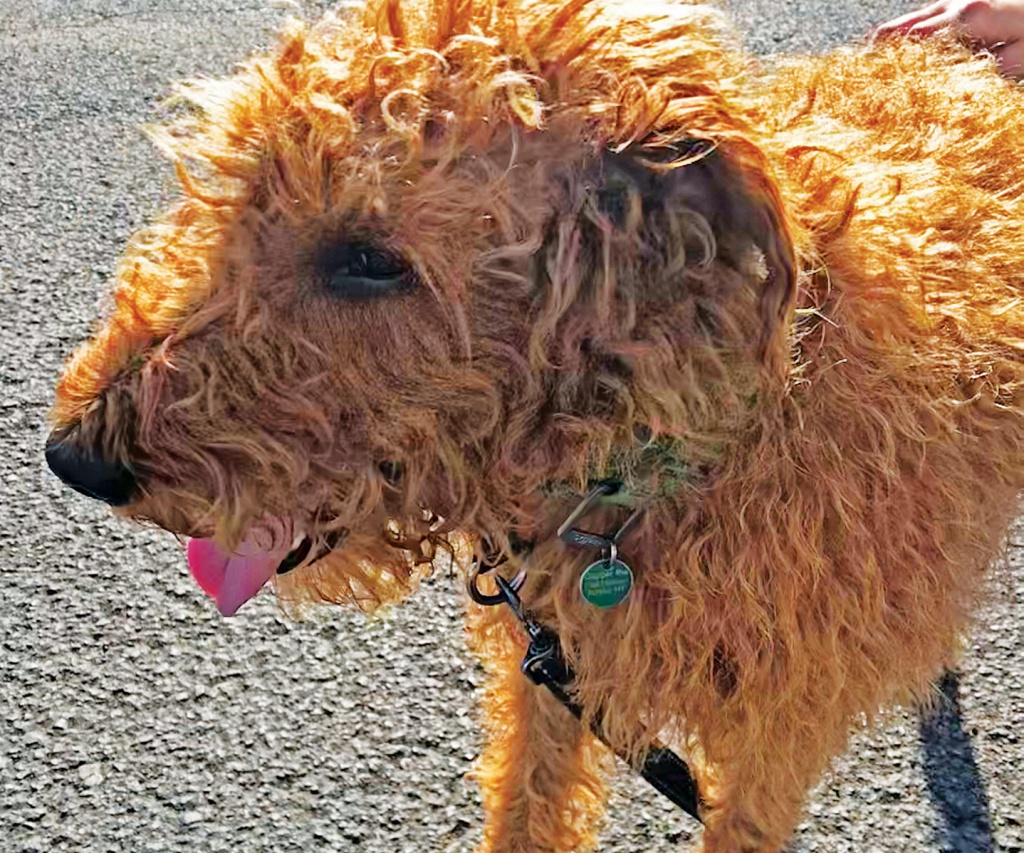 Copper the Irish Terrorist is a 4½-year-old Irish Terrier. He looks in the mirror and sees himself as bigger, stronger and braver than the biggest, baddest lion on the planet. Copper’s superpower is being a loving, adorable pain in the (you get the idea).
– Steve Hammill and Cindy Huang-Hammill (Marathon Coach #0922) 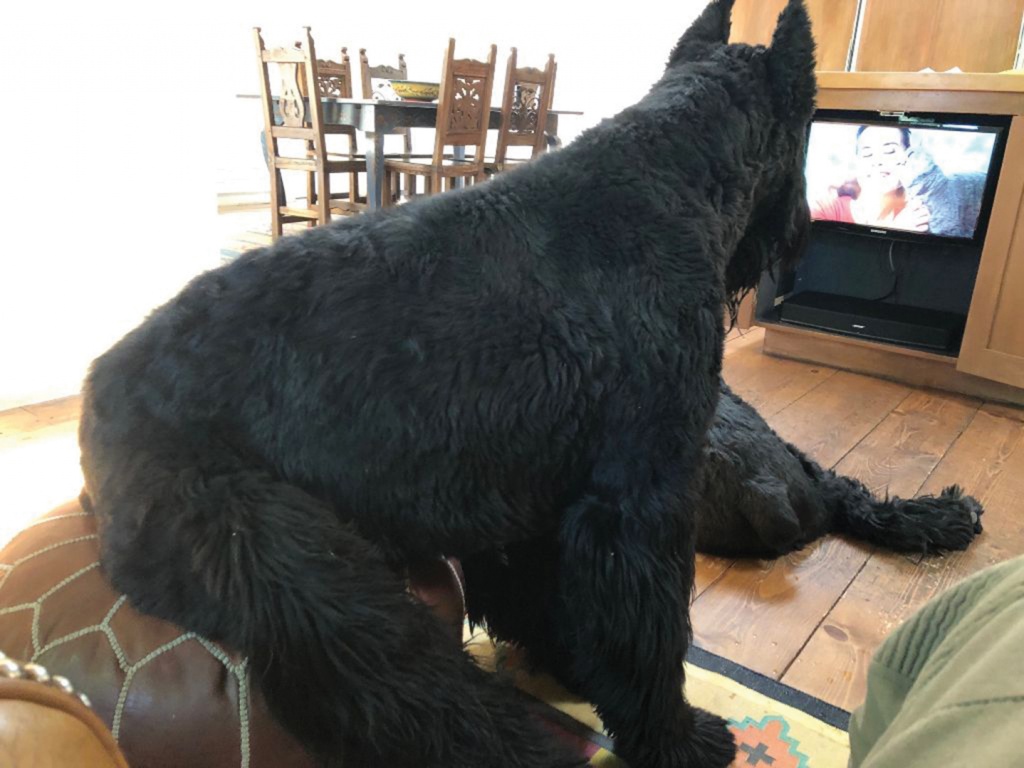 My three-year-old Giant Schnauzer, Jake, watches television while sitting on a puff cushion. Although an alpha male, very athletic and extremely active, it’s amazing how he can slow down, relax and watch his favorite programs. He actually recognizes his favorite show by its accompanying music. Felix, my other male Schnauzer, is almost 11, is a lover and loves to drive my Marathon coach!  I often need to remind him that dogs cannot drive. Felix loves the experience of riding in my coach.
– Kenneth Kallen (Marathon Coach #1221) 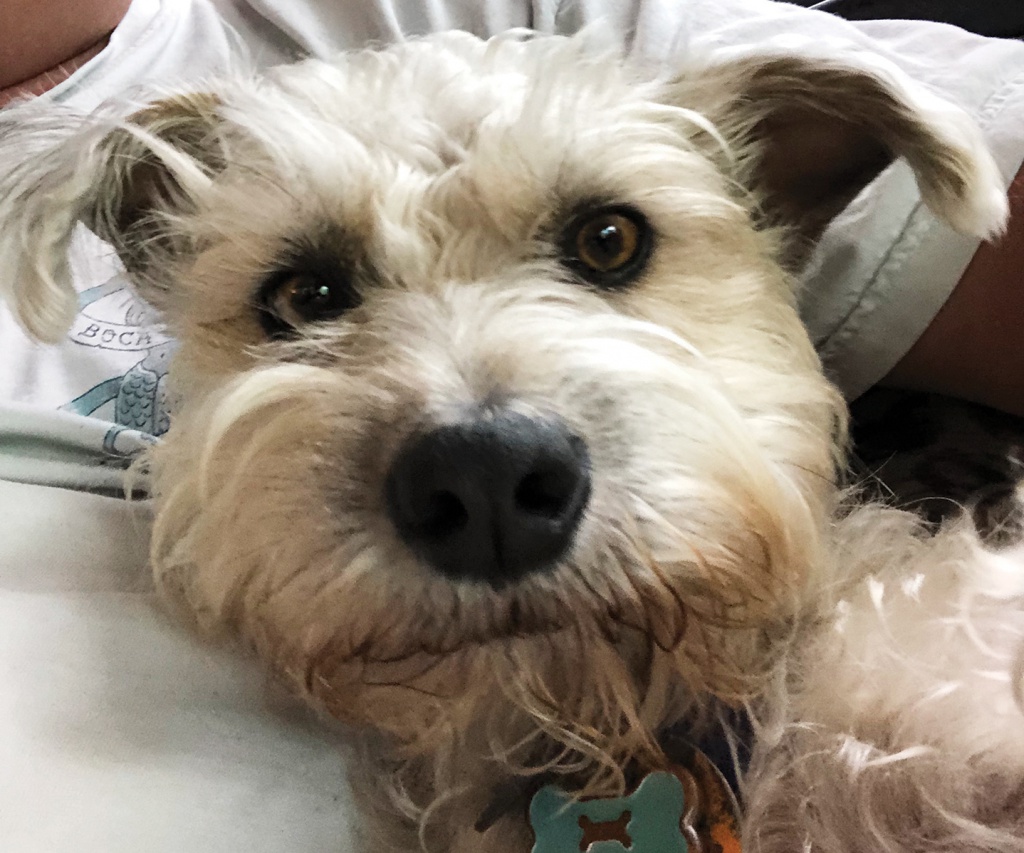 Meet Kona, a 3½-year-old mixed breed who was found living on the streets of Houston, Texas. For the past 2½ years, she has been riding shotgun in her Marathon coach while her obedient driver shuttles her about fulltime. She loves connecting with old friends on her adventures. She is frequently seen at Hearthside Grove, Mountain Falls and Myakka River Motorcoach Resort. She never forgets a face and loves initiating a game of “catch me if you can.” It’s hard to say who rescued whom.
– Greg Swartz (Marathon Coach #0721) 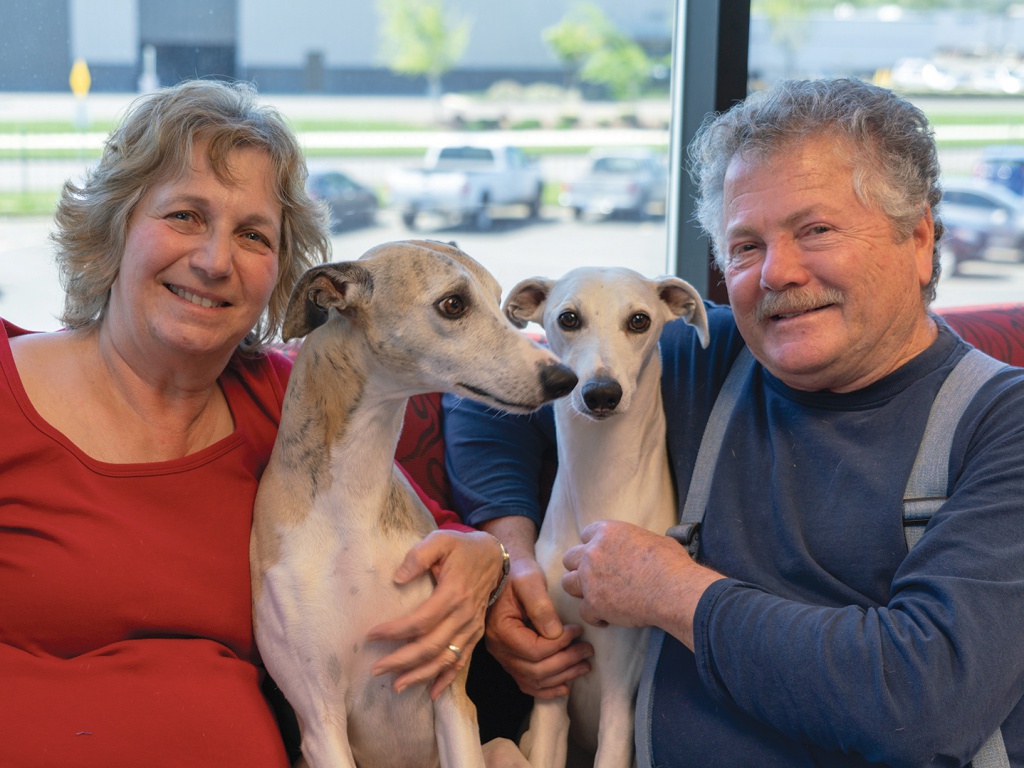 Meet Chuck and Buttons. These two affectionate whippets are expert runners and expert couch potatoes. They can often be found in Marathon Coach #0820 – their owners’ 14th RV, but first Marathon. Owners Mati and Arleen are known to take them on road trips to race with the American Kennel Club, where they can usually be found winning a toy or trophy.
– Mati and Arleen Cohen (Marathon Coach #0820) 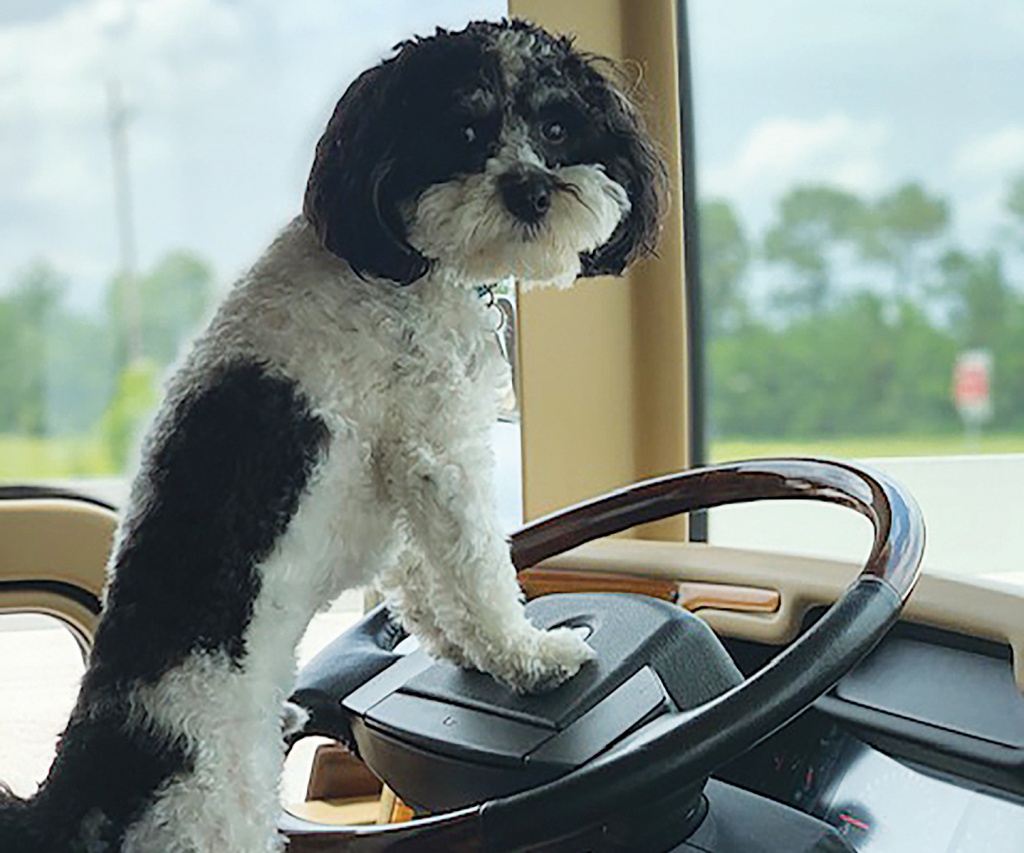 Elvis, a 20-month-old Cavapoo, is the perfect mix of Cavalier King Charles Spaniel and poodle. Known to be vivacious, playful and inquisitive, his human parents claim he’s even smarter than they are. Able to drive his Marathon coach when the roads get ruff, we look forward to seeing what’s next for this adventurous dog.
– Jerry and Geneva Keeton (Marathon Coach #0924) 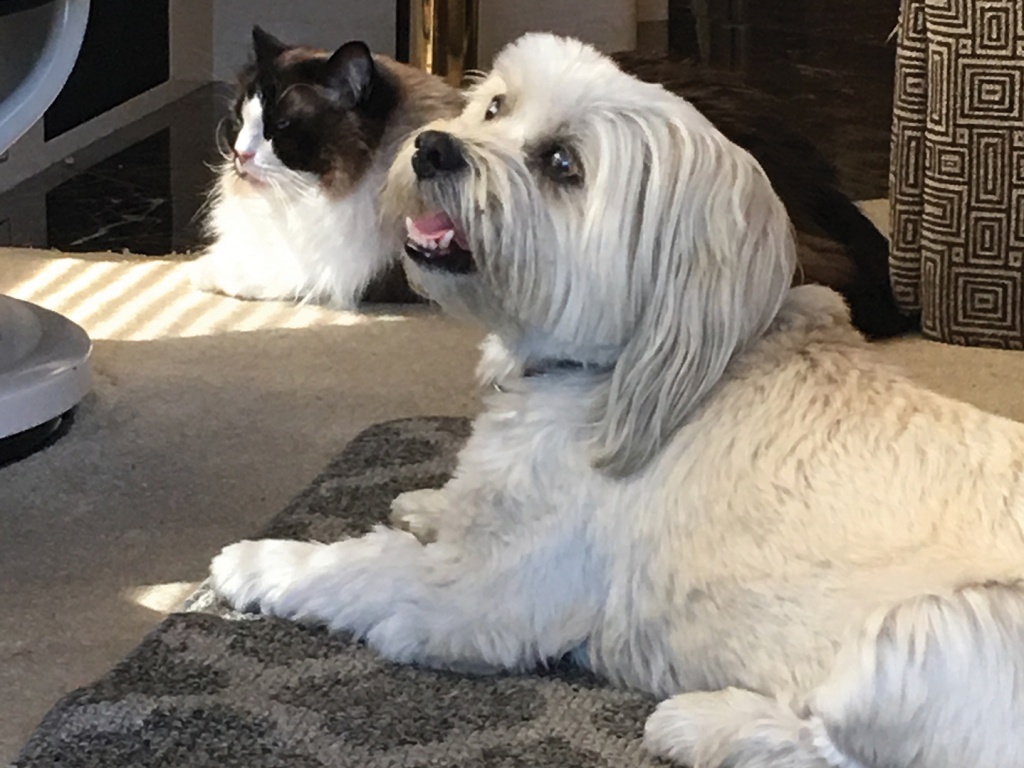 Truman is our 10-year-old Lhasa Apso that travels with us in Marathon Coach #0694. He shares the coach with his feline travel mates, Kosey and Izzy, a pair of Ragdoll cats. Truman lives up to his name in just about every way: He has a very bold attitude and knows in his heart that he should run the world … he started training us early on and hopes to have us shaped up soon. Truman enjoys the coach and travels while tucked into one of the top stairs or sprawled out on the H3’s landing. When underway, the cats take up their normal positions – Izzy all the way in the back where it’s noisiest, and Kosey in his carrier in the salon.

On occasion, Truman asks to sit on the copilot’s lap. He enjoys the desert life in Palm Springs November through April, and living in the Pacific Northwest in the summer. This 20-pound dog has a much bigger attitude than many bigger dogs I have known; he sits up whenever we are stopped with the Marathon and guards his family – one of his many jobs! Although Truman has lost sight in his left eye, being diabetic and requiring insulin twice a day, he’s still able to enjoy the dog park in Palm Springs and the wooded trails of the Northwest.
– Jim and Barb Griffith (Marathon Coach #0694) 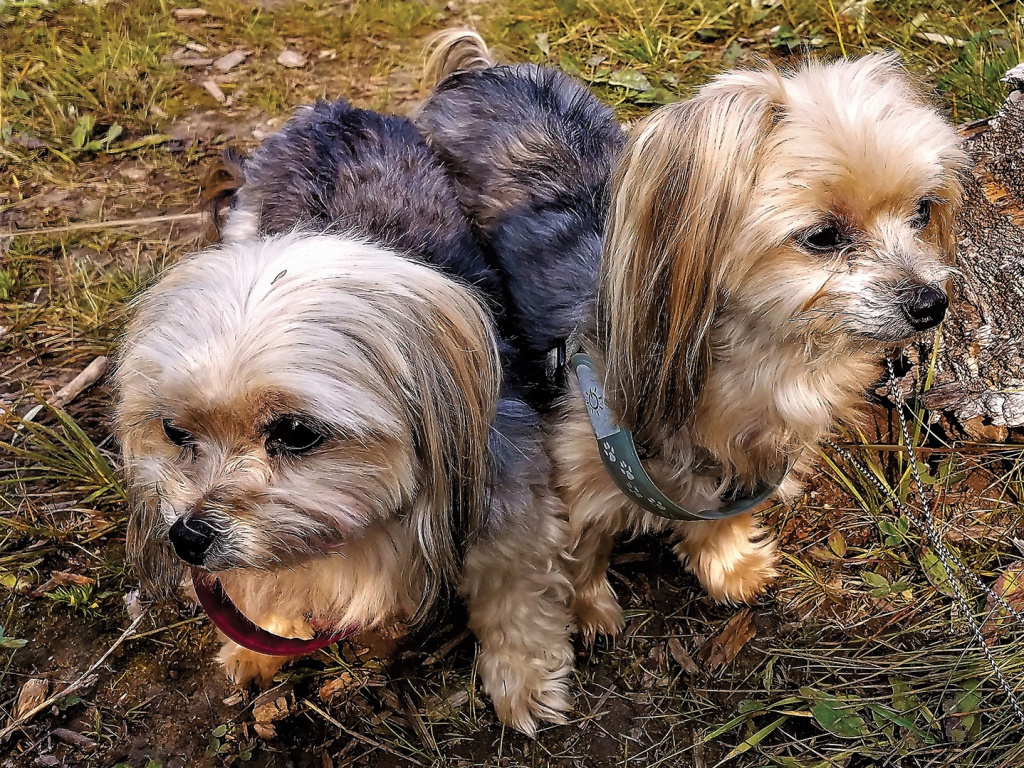 Welcome Ginger and Chewey (the Morkies) to the Marathon lifestyle. These two came to live with owners Ed and Jan Cheeney nine years ago, when they had their Marathon in the mountains of New Hampshire. Ginger absolutely loves watching the world from the back of the sofa and barking at anything moving outside. Her brother, Chewey, then joins in even if he doesn’t know what he is barking at. They are ready for any adventure because at each new stop there are new smells to explore. Chewey and Ginger like showing off their Marathon coach and often when they make a “pit stop,” their driver, Ed or Jan, are asked, “Whose coach is this?” The reply is, “It’s Chewey and Ginger’s, the brother and sister dog act from Vegas.” People are amazed that these two little dogs have such a nice coach in which to travel and see the country. And they have seen much of it: the Florida Keys, Canadian Rockies, Charleston, New Orleans, California, Québec City, Zion National Park, Cape Cod, and of course their home base, Michigan. They are seasoned travelers and love welcoming visitors to the coach. Thank you Marathon for their spacious home.
– Ed and Jan Cheeney (Marathon Coach #0857) 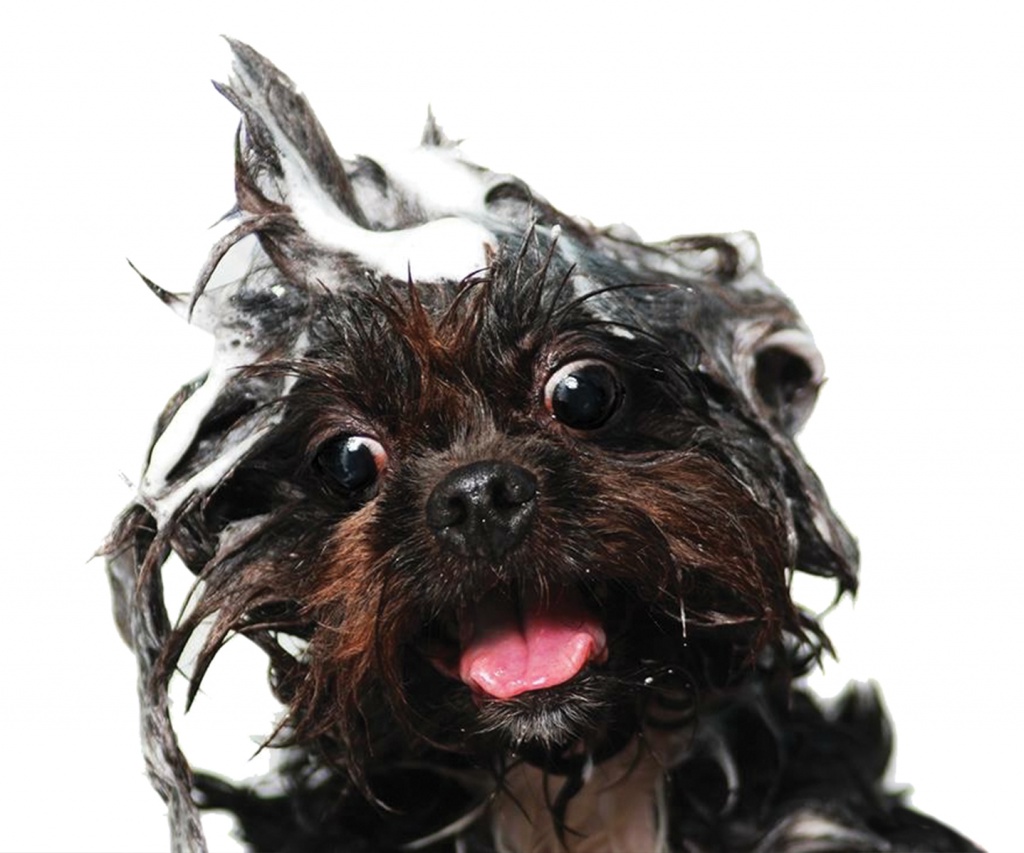 Randy: Short in Stature; big in personality. Randy P. Baugh was my grandmother’s dog and the best inheritance imaginable, as six years ago I received this gift of joy, love and purpose during a very difficult time. A 14-year-old Shih Tzu rescue from Memphis, Tennessee, he relishes the attention of loved ones and strangers alike. This little guy has lived in three states, frequently taking 2,000-mile road trips and occasionally 6,000-mile loops around the U.S. to visit his many admirers. Although it’s obvious he was born to be a road dog, he enjoys quality couch time at home as well. One of his favorite pastimes is visiting the crew at Marathon Headquarters. He loves visiting with his friends, racing down the long, winding hallways and taking naps under my desk. I work hard so that this short guy can live a good life.
– Miki Markovich, Marathon Coach Assistant Marketing Manager 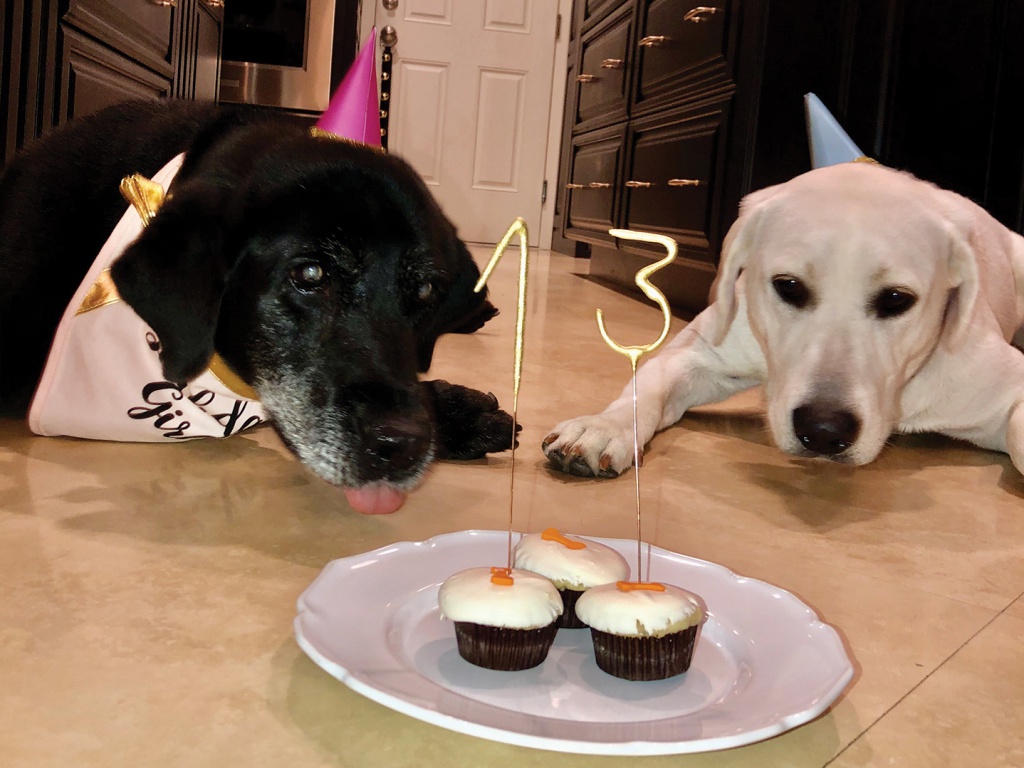 Who among the Marathon family doesn’t love a festive party? Although shown here in utter anticipation, Missy, celebrating her 13th birthday, and Millie, a highly energetic 10-month-old, were in complete bliss once the pupcakes were served. Aside from sharing a home and family, this dynamic duo also have their love of walks in common – although Missy’s enthusiasm wanes around five houses down the block, while Millie is excited to run and roam for at least a solid 40 minutes and many miles.
– Julie and Steve Schoellhorn 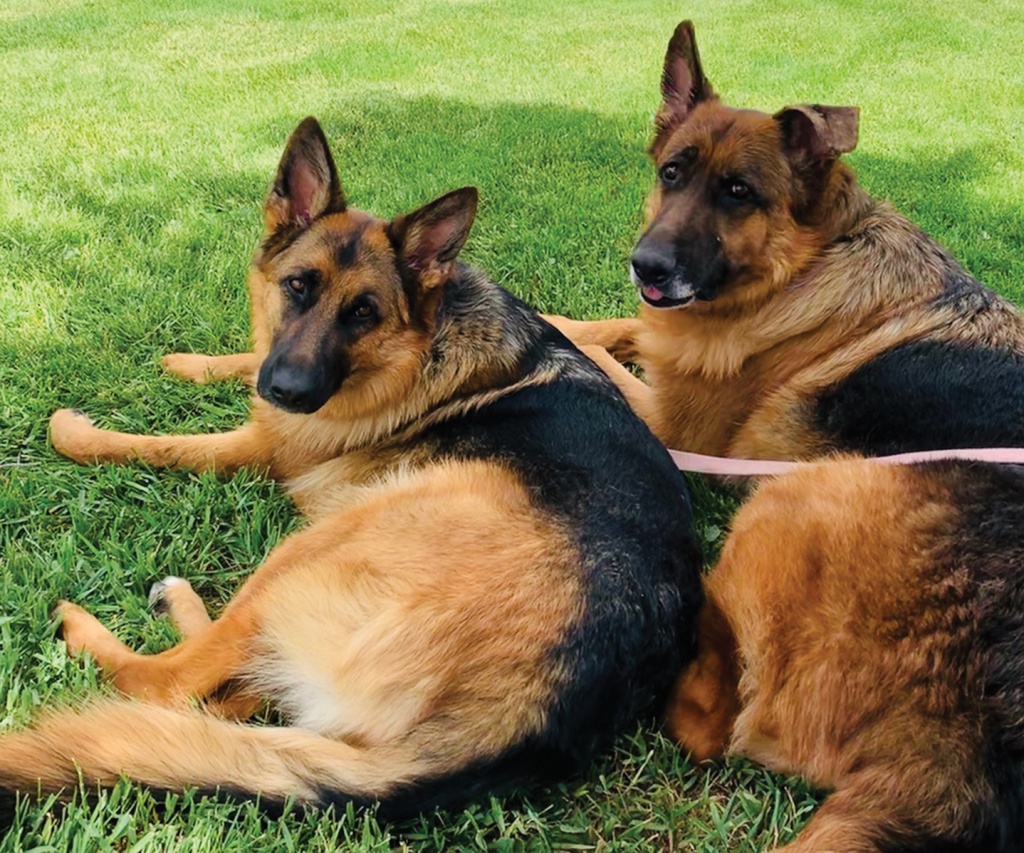 Uzi, six years and six months old, is a German shepherd who came from West Germany with nothing but a passport and papers when he was a mere four months old. He has now traversed the United States in three different Marathon coaches, and absolutely loves traveling in his bus – always at the ready when the bus fires up. If asked, Uzi would say one of his favorite winter destinations is dry camping in the desert of Quartzite, Arizona. As for a favorite summer spot, it’s definitely Oregon. Uzi really loves camping at Marathon Coach Headquarters and being the BIG dog of the plant. He’s also a big Dallas Cowboys fan.

As for Uzi’s best friend, two-year-old Kimber, she’s from Nevada, Texas. When Kimber first met Uzi she was five months old. Uzi introduced her to camping as soon as she was delivered to Marathon Coach in Grand Prairie, Texas. Leaving Marathon Coach Texas for Rich and Debbie’s Lake Havasu City, Arizona, home, they took a detour to Colorado, staying a week at Wolf Creek Run Motorcoach Resort in Pagosa Springs, Colorado. This is definitely Kimber’s favorite place to camp. Her love for camping runs deep. Anytime Kimber gets to go out to the RV garage, she lays by the front door of the bus. If the door opens, she runs inside and gets a toy or treat, and stays in the bus until someone forces her out. Her second favorite pastime is driving — yes, driving — her Jeep.
– Rich and Debbie Sanderson (Marathon Coach #0922)

Out on the Road with Marathon Coach #1264!  Dave Bash drives the team to local pastry shop “Nana’s Café” for …

Brighten Your Day with the Goldendoodles of Marathon

Meet Patches (the adventure cat). Near twenty-years-old, Patches is traveling in her third Marathon with her “parents” Jack and Lois. “I’m …

For the Love of Luxury RVing with Charly

Marathon coach owners Milo and Jesse never take a road trip without their faithful companion Charly. And Charly? Well, this …

The F-Troop: That’s the term Jamie and Debbie Bradford use to lovingly refer to their two dogs, Friday and Fitz. …

Visiting Marathon Headquarters and wondering where to take your dog for grooming or a good meal?

If you find yourself visiting Marathon Coach Oregon and you’re not sure where to take your dog for care, grooming …

Visiting Marathon Oregon with Your Pet? Check Out Some Area Dog Parks!

Whether our visitors have two legs or four, our goal is to provide an exceptional experience for the entire family. …

Joy personified, but with a tail, Sunflower is a Cavachon – the perfect combination of Cavalier King Charles Spaniel and …
Social media & sharing icons powered by UltimatelySocial