As he sits in a room filled with Marathon rally attendees merrymaking, he quietly listens and watches — it’s obvious this unassuming man has no need to be the center of attention. Without an invitation into his inner circle or an insider tip from his self-proclaimed better half, Sandy Kincaid, one would never know that Shelly Ward is a stunt coordinator, racer, inventor, designer and wildly successful businessman, much less that he’s been involved in such well-known films as, “Mission: Impossible – Ghost Protocol,” two of the “Transformers,” “Rush Hour 3” and “Mr. & Mrs. Smith,” not to mention Super Bowl commercials and other projects most of the U.S. population has seen at one time or another.

Shelly’s fascination with performance and speed is nothing new; in fact, he believes it began as early as his tricycle days, growing up in a car world with his father’s business of television commercial production.

“My sister’s one year younger than me, and my brother’s five years younger,” said Shelly. “My sister and I grew up on minibikes and dirt bikes, go-carts and dune buggies. We lived in southern California, 20 to 30 miles outside the city. I tell people we grew up with a pack of coyotes. That’s how kids grew up then.”

Even at the tender age of six-years-old, Shelly customized his ride. “Growing up, you didn’t leave your bicycle alone,” said Shelly. “You chopped the frame, draped the front end, built big, high rise handlebars for it, painted it and put it back together. Nothing was ever
left stock.”

Before long, he was racing bikes off-road. He then advanced to dirt bikes, motorcycles and cars. “Off-road cars were always class one single seaters,” said Shelly, “which hardly exist anymore as almost every off-road vehicle now has a passenger in it. Back then the fastest cars were one-seaters.” 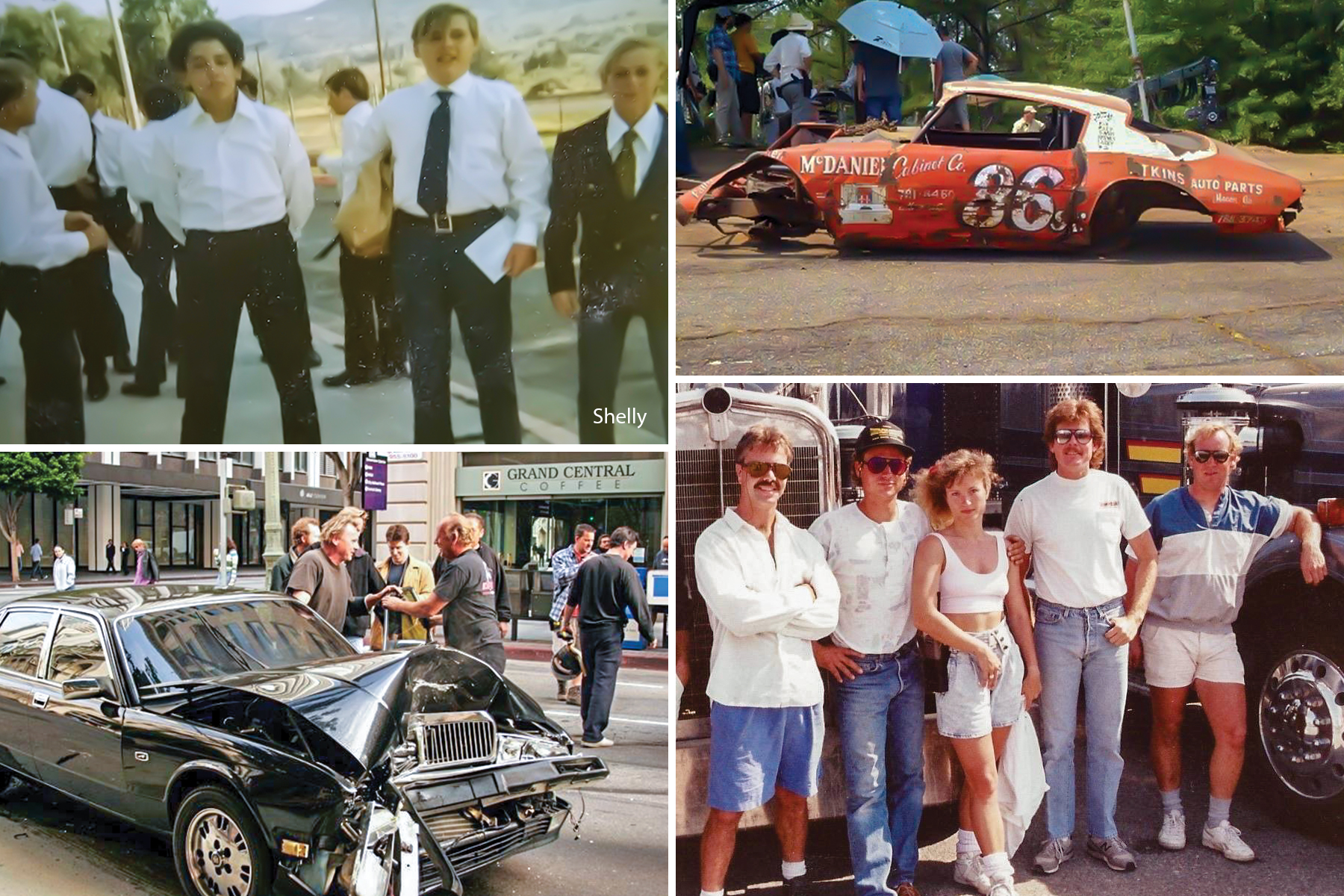 At the age of 16, Shelly earned the distinction of being the youngest driver to complete the Baja 1000 solo, an arduous, off-road, point-to-point competition that starts in Ensenada, California, and finishes in La Paz, Mexico.

And that love for racing continued. “I didn’t go to my high school graduation in 1975,” said Shelly, “I was too busy racing the Baja 500. I think my mom picked up my diploma about a year later at Palmdale High School. By then, I was too busy working.”

In 1979, he established Shelly Ward Enterprises, a vehicle prop fabrication and mechanical FX one-stop shop. Shelly can prep, paint and drive, having performed in more than 25 feature films and 1,000 commercials. If there was a diesel truck and a spectacular fiery crash involved, most likely Shelly was in the driver’s seat showing what he’s made of.

“Aside from the actual driving, we do a major amount of customization,” said Shelly. “When it comes to vehicle effects, everyone thinks there’s all kinds of effects to do to a car to make it slide or jump. Until about five years ago, before CGI (computer-generated imagery) became so popular in the commercial arena, almost everything you saw was real.”

Shelly recounts a visit to Great Falls, Montana, within the last several years. “Six or eight years ago, if you saw the commercial of the car driving this beautiful black road through a field of crops, that was real. We’ve gone into cornfields and paved roads — actual asphalt through the cornfield.”

Of course, Shelly is no one trick pony. He’s known in the industry for his ability to modify vehicles to do whatever the client requires.

“I’ve watched him take paper and start drawing while explaining to his guys how to build an apparatus to make the car, bus or whatever, do something different,” said Sandy. “For example, making a bus drive on two wheels.”

Although the two attended the same high school, even graduating the same year, it wasn’t until they met through the Screen Actors Guild that the Hollywood magic happened. Sandy worked in the commercials department and became the head of the stunt and safety committee and an all-around advocate for the stunt community. The two worked together from early in her career, but they didn’t know each other well, except for business purposes, until nine years ago.

“I happened to run into him at a local restaurant in Agua Dulce and we started talking that one day — we’ve been together pretty much every day since then,” explained Sandy.

“Before seeing Shelly’s Marathon for the first time, I had never seen a motorhome that was a bus,” said Sandy. “I had never seen the inside of one before. I’d see the entertainers’ buses going down the road, but I had no idea people actually lived in them until early in our relationship. One day Shelly said, ‘Let’s go away for the weekend.’ I showed up with my pillow and my little bag. When he pulled that bus out, I said, ‘What is that?’ And then we went to Death Valley.”

Almost a decade later, Death Valley is still a favorite spot to get away from it all. “Our favorite place is where nobody else is,” said Shelly. “We stay on the fringes of Death Valley and do day trips in the Jeep. I think we both like staying away from civilization, preferring dry camping and rugged adventures.” 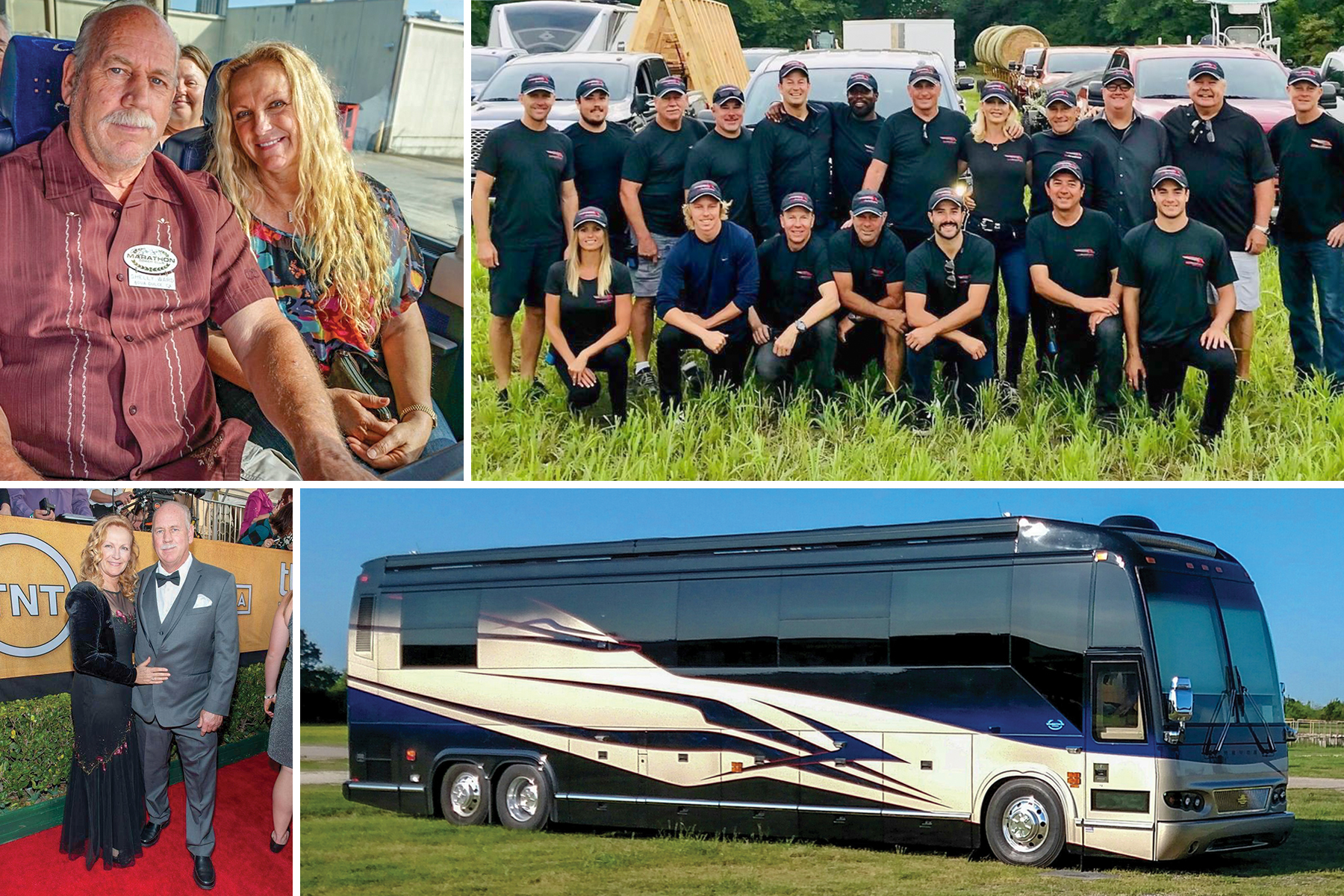 Although Shelly and Sandy enjoy adventures on their own, the two shared that everyone they’re really close to, they met at rallies.

“Our circle of friends is very large, it’s very diverse. But as Shelly said, the group that we tend to roll with are people who either own Marathons or large motorhomes,” Sandy explained. “And the most interesting thing to me is we don’t have any close friends who live where we live. All our friends, for the most part, live in other states. And we still manage to see them all more than once a year, and it’s because of Marathon.”

One of the places they see some of their friends is at the St. Paul Rodeo every Independence Day. It’s not a surprise that Sandy has an interest in horses. She was nine-years-old when her family brought home their first one. And when she was 11, her grandparents moved to Sutherlin, and they bought a three-year-old race horse. “Yes,” Sandy said, “a race horse. That was when I really learned to ride.”

Well matched, Shelly also likes to go fast. When asked how fast he’s comfortable driving, his reply was instant: “As hard as it’ll run.” Having had quite the collection of fast cars in his day, he says he has switched his everyday vehicles because he still tends to push them as fast as they’ll go.

And what about his Marathon coach? He has added a few horses there as well by modifying it with a hot rod motor. “I mean,
I don’t leave anything alone.”

Your Coach Delivery: The Big Day is Here, What to Expect

When you purchase a luxury motorhome you have high expectations, and rightfully so. You want the company you choose to …