Jim Cogley: Music and Marathons Run Through His Veins 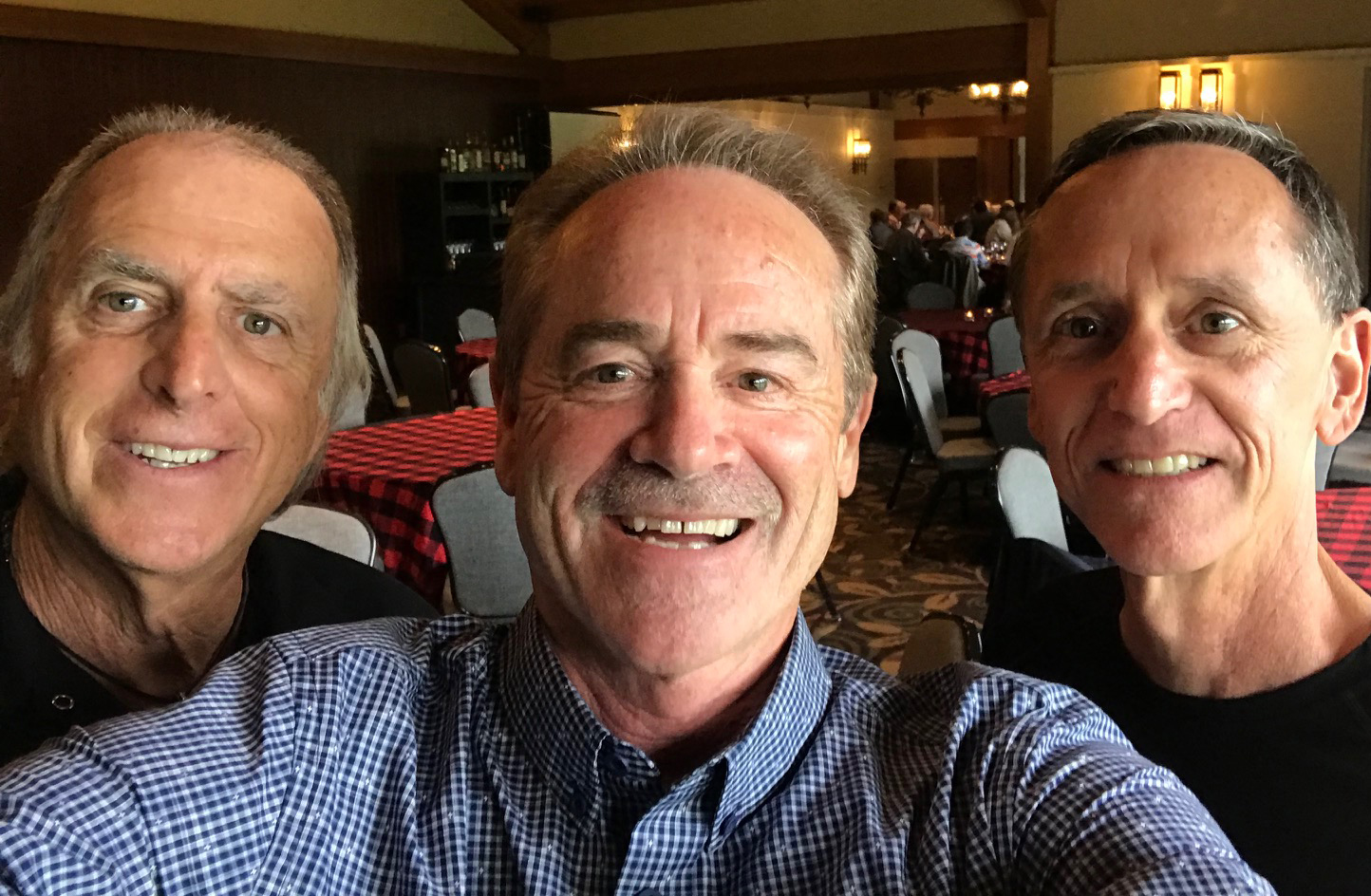 Whether you glimpse him strumming his guitar at a rustic campground in Oregon or you see him walking from coach to coach saying hello to friends at a pristine resort in Indio, California, chances are this down-to-earth luxury coach salesman will be donned in a pair of Wrangler jeans, a leather belt and a toothsome ring, all fit for a proper cowboy. Known for his friendly demeanor, his golden pipes and his knowledge of everything luxury RVing, those who know Marathon, know Jim Cogley.

Jim celebrates his 22nd anniversary with Marathon in April, 2019. He grew up on an Eastern Oregon ranch, where he began playing music at eight or nine. After his dad showed him a few chords on a guitar, making music became a passion that slowly took on a life of its own.

“Dad had a guitar, and he played as a young guy,” said Jim. “So when we were kids, there was always a guitar available; once in awhile we’d grab it to play a little bit. Then when I was around 12, I got one as a Christmas present.”

Soon thereafter he found himself in his first band. “We didn’t have microphones,” explained Jim. “We didn’t sing in that band; the three of us just played. We had a drummer, a bass player and me. We played our first gig in a local Grange Hall and lucky for us, some of the local farmers and kids our own age came to listen.”

This young trio played timeless tunes that still find their way into today’s playbook, such as “Louie Louie,” and “House of the Rising Sun.”

“If you were born with music in your brain, like I was, then you just picked up on things,” said Jim. “That’s how it starts. In our day it was the Beatles, the Rolling Stones and the Beach Boys. It was also different music than your parents played, so all different styles and types.”

He played in his second band, Showdown, somewhere between 1980 and 1984 in Klamath Falls, Oregon. “That was a country/rock style band,” remembered Jim. “We played for 10-year class reunions, Christmas parties, weddings and a few bars. We were a weekend-type band because we all had jobs during the week.”

Although music has been a lifelong passion for Jim, he’s been known to go years without it, and then inspiration will strike. “For me, music has always revolved around friendships,” said Jim. “That’s what it is.”

Jim’s love of music merged with his profession in the late 1990’s, when Leon Smith joined the Marathon team. Leon came from a musical family and had been performing onstage since he was five or six years old. In 1959, he had a number one hit with “Little 40 Ford.” It wasn’t long after the two met that they began performing together.

“That was a unique moment in time,” said Jim. “Leon and I never called each other a band, we were just Jim and Leon. We played a lot of rallies with Bob Schoellhorn and also went to his ranch to play for our customers there. We had several wonderful years playing music together — I learned a ton from Leon.”

Some of Bob’s favorite songs were Frank Sinatra’s “My Way” and Willie Nelson’s “Angel Flying Too Close to the Ground.”

“It’s such a blessing to be able to express yourself in some artistic manner,” said Jim. “And to have the opportunity to do that in a setting that revolves around my profession, that’s another unique opportunity. I have to give credit to Marathon Coach for allowing me the latitude to be able to do that. That’s a huge part of it, a vision of trying to maintain who I really am in the confines of the job I have. I think that’s what’s really great about it.” 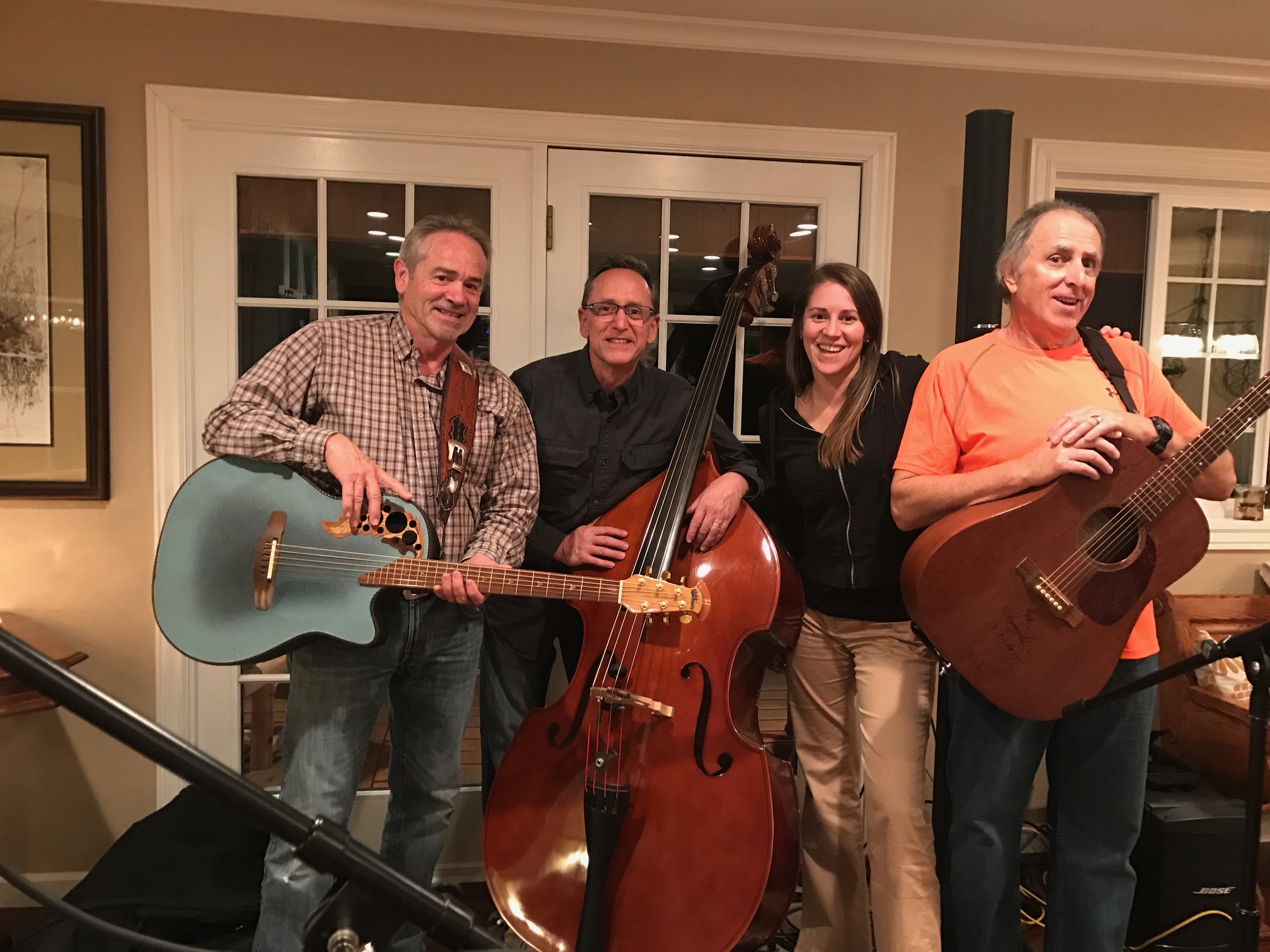 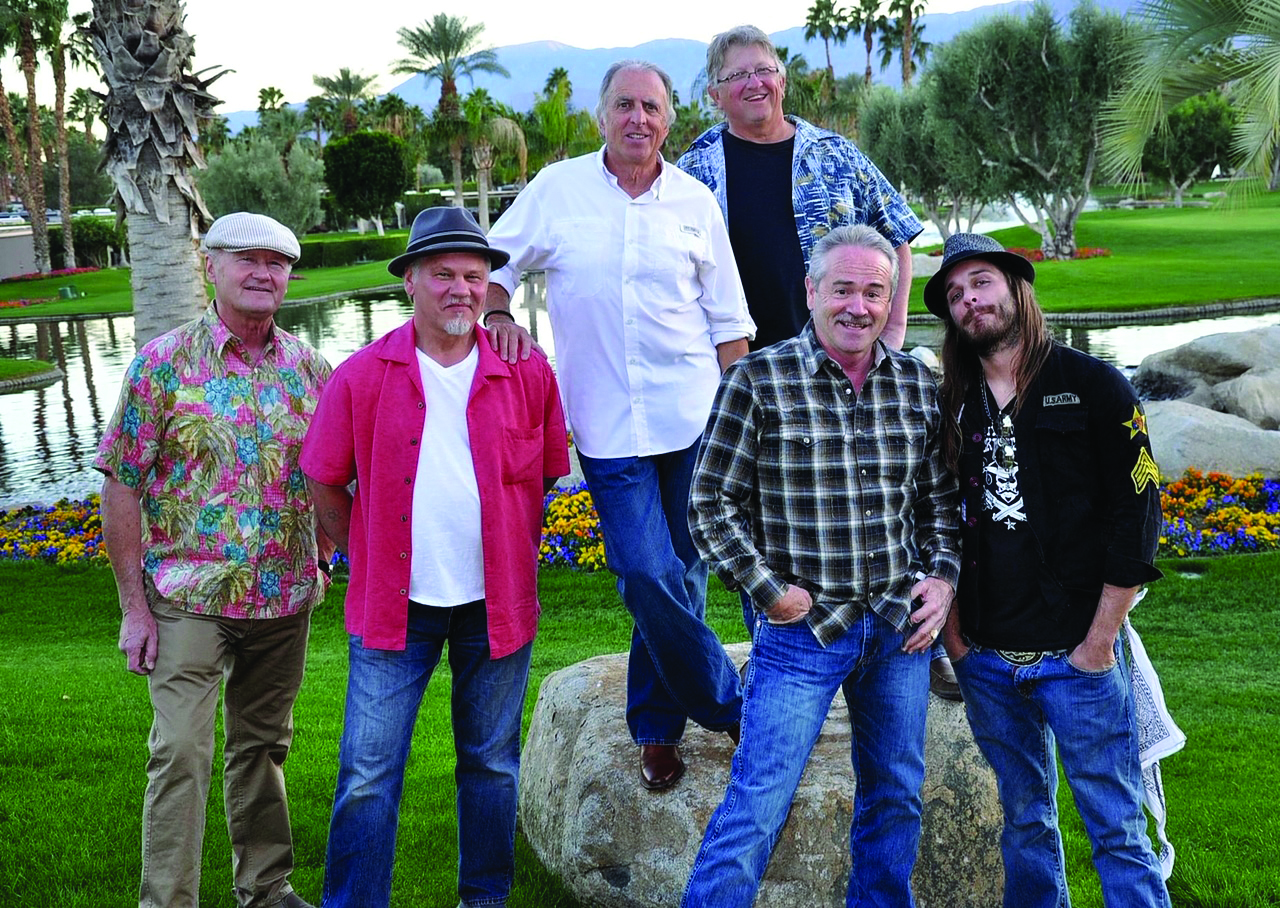 Now, most know Jim’s music from his quality time with the Diesel Pushers. Forged in friendship, this fun-loving band became a reality after Jim met Phil McCracken, who lives in the Eugene area, but winters in Outdoor Resorts Indio in Indio, California.

Having played harmonica with Merle Haggard at Lake Shasta for nine years, Phil knows the ropes. “Phil is a very unique, creative man that has both sides of the brain working at the same time,” said Jim. “He’s a high-tech guy, a real computer savvy guy. At the same time with all that knowledge and ability, he’s just a wonderful musician and a very creative person.”

“Because of his ability to put all of our music and songs on our iPads, Phil makes it easy,” explained Jim. “He does so much leg work that all I have to do is get finished with a test drive in the evening, jump over and strap my guitar on and we’ve got a whole three hours of music we can play together. I just snap in, put my iPad up and we’re done. He makes it all so controlled and organized, I don’t even really need to practice.”

Even his daughter Lauren has been known to sing with the band. “She was inspired by our lifestyle and the RV thing, having grown up coming down to the desert during spring break,” said Jim. ”As a teenager, there were quite a few years where she was singing in the car to herself, but we never knew that she had real vocal talent.”

Graduating a semester early from high school, Lauren moved to Indio for the winter, securing a job as a server at the Motorcoach Country Club restaurant. Here, one of her coworkers convinced her that all servers were required to sing on Tuesday karaoke nights.

Panicked, she asked her dad what she should do. Jim took her to the casita of his friend Bruce Nelson, who just happened to put on the karaoke at MCC.

“That was the first time I truly heard her sing, during that practice,” said Jim. “Bruce looked at me, and I looked at him, and we both said, ‘Wow!’ Then Bruce told Lauren, ‘You better learn more than one song because there’s no way they’re going to let you get off just singing one; you better learn two.”

As nervous as she was, that Tuesday night she got up and sang in front of an audience of 150 and was an instant hit. She continued to sing on Tuesdays through that winter with people regularly supplying song requests.

“And then we made a pact,” said Jim. “When she finished with that season, we were going to get together and sing.” Altough it took a few years for that promise to become a reality, father and daughter started singing together about three years ago. 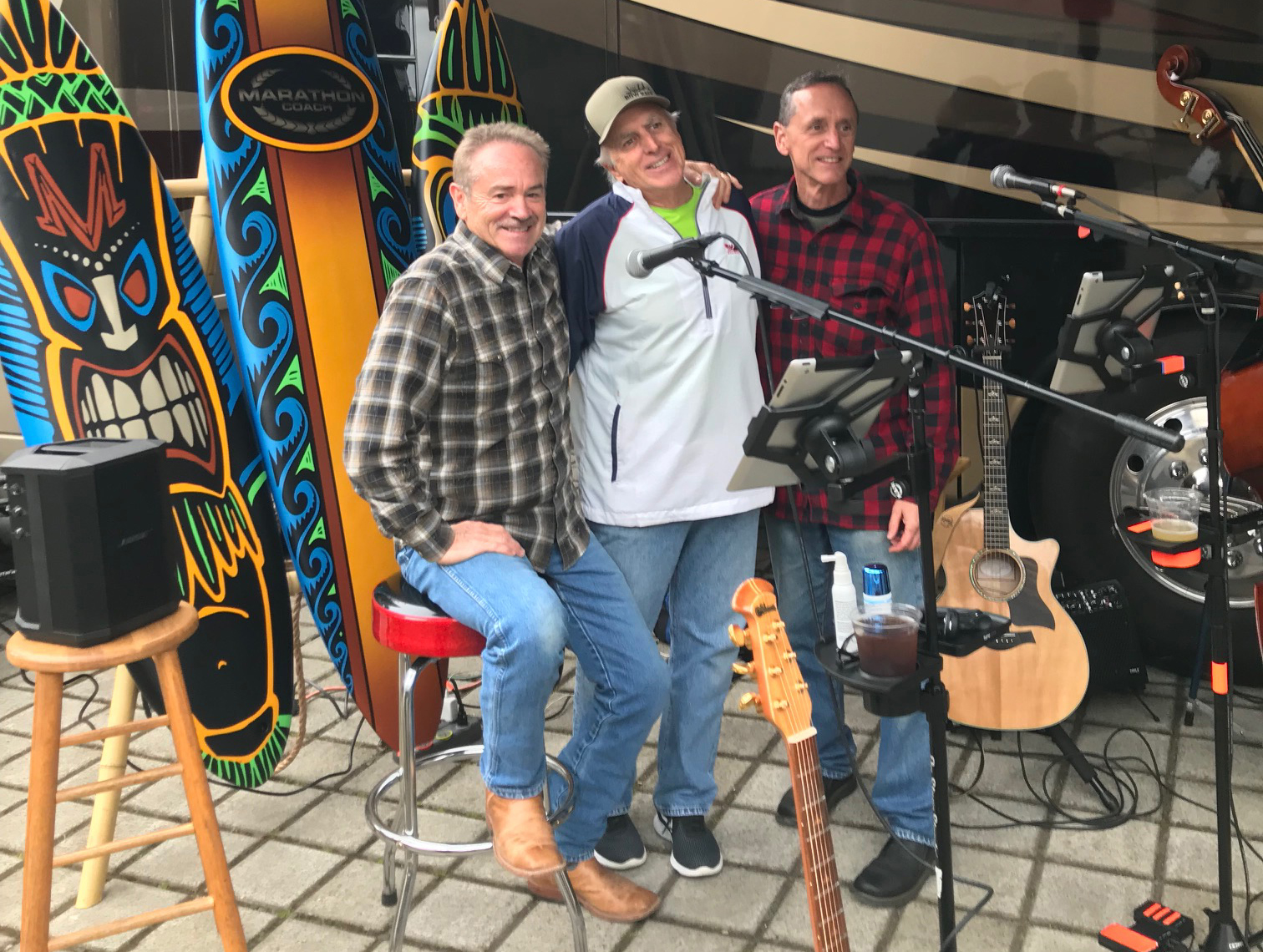 Should the Diesel Pushers ever desire more Cogleys in the band, Jill, Jim’s wife of 35 years, plays piano, while his sons Brian and Kevin both play guitar. Perhaps it’s time his family procured their own Marathon bus to tour in.

“When it comes to the RVing community and Marathon owners, I enjoy the diversity of the people I deal with and the people I meet on the road, all with different lifestyles,” said Jim. “I appreciate the freedom of the road and getting out. It seems like when people are in that mode, out RVing, it’s a celebration of life. That’s why it ties in with music so well. It just goes hand in hand. They’re out there to have a great time and music is a big part of that.”

Your Coach Delivery: The Big Day is Here, What to Expect

When you purchase a luxury motorhome you have high expectations, and rightfully so. You want the company you choose to …