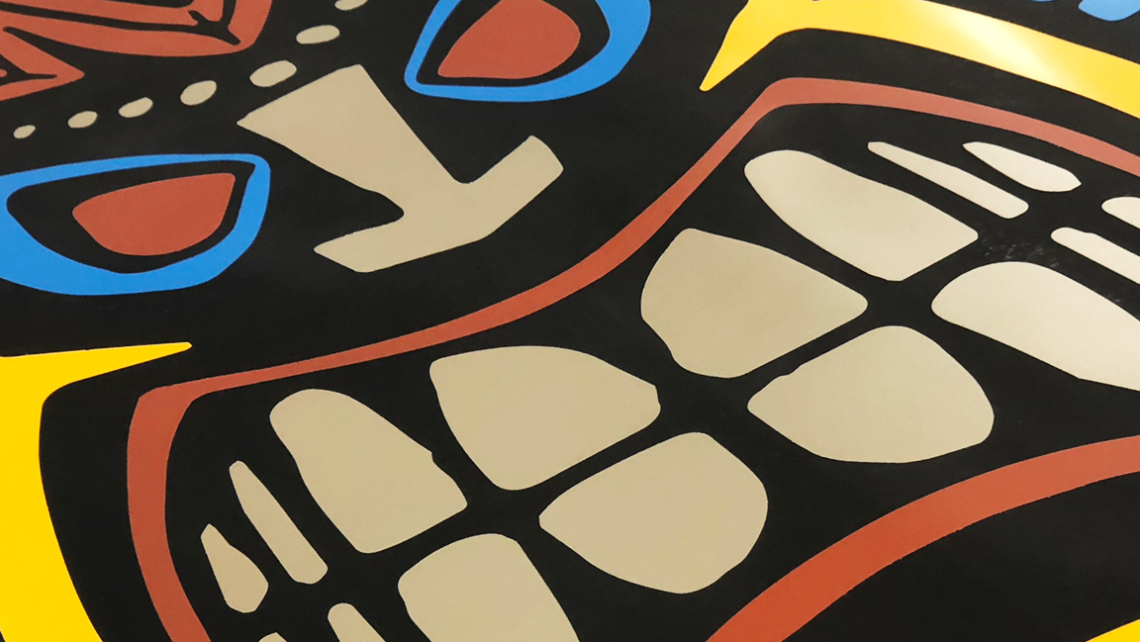 For several years now Marathon Coach has been hosting events at Motorcoach Country Club and Outdoor Resorts Indio around the middle of November. This year Mal Williams, one of our sales staff, will be joining Jim Cogley (also sales) and I (Pete Sutton, marketing) for the events, and he had an idea. Make it a tiki party. Jim and I liked the idea and so we started planning.

Mal went on a hunt for four used surf boards that would be in our price range. He took them home and gave them a bath in boiling hot water to get all the wax off. (Surfers use wax to help their feet grip the surf board.) The boards then sat in the Marketing office while we decided how to display them.

In this modern age I don’t use an Exacto knife as much as I used to. So its time to break out the iPad and Apple Pencil.

The nice thing about the iPad is the ability to take a photo from the device and go right to work trimming out the image. Here you can see two ideas created with trimmed out photos of the boards and materials that gave us a direction for the project.

We wanted a nostalgic feel to the art so I looked up Tiki posters from the 60’s and finally settled on this color scheme.

With a color scheme in mind it was time to go back to the iPad and come up with some designs for the boards.

I started with three simple Tiki designs based off of what I had seen on old posters. I then re-drew my favorite two Tikis over the two boards and then added color. Later I worked on the other two boards. One with tribal patterns on the edge with the Marathon Coach logo, and the last board that would be display horizontally as an announcement that there was a Tiki party tonight. For that final board I created more tribal patterns for the edges and hand lettered the word Marathon in Tiki style down the center of the board.

The bonus to working from the iPad was the ability to convert the files into stencil patterns that our CNC vinyl cutter understood directly on the iPad.

I picked out the paint chips to match my color scheme and Andy, our lead in the paint shop, had the colors mixed for me.

The boards were painted black and the stencils (seen as white in the photos) were applied. Andy again lent a hand applying the stencils. I found out quick that this was a two person job. Andy, if you ever read this, thanks again for your patience.

Andy set me up with one of his paint guns, showed me the basics and away I went with the green.

Each time a color went down the boards wiped clean and masked up for the next color.

If it looks like a lot of work, you are right. I gained a lot of respect for the paint team through this project.

Once the masking was pulled off there were blemishes that needed to be touched up.

I’m not sure if Andy and Edgard felt sorry for me, or if they just needed the booth back, but they swept in and in very short order fixed my mistakes and clear coated the boards. Again with the respect. Their years of experience really showed in their speed and accuracy when contrast against my few hours of painting experience. I’m glad they’re the ones painting the coaches!

There couldn’t have been a better pick to help us with the engineering and assembly of this project than Steve Sweiffert. Steve spent his early years as a surf bum in Southern California. He knows how to surf, knows the lore, can speak the surf language and still has a love for all things surfing related.

Steve took the early concept drawings and worked up a model to prove out the design. He ordered in bamboo, rope and Tiki lights and went to work.

Steve wanted these displays to be easy to set up, easy to transport and stable even in the wind. the first problem to solve was a way to hang the boards on the bamboo A-frames. He came up with a strong and simple hanging bracket that worked great. Next he designed a similar bracket for the Tiki lights. Finally he added a large bucket that could be filled with ice, water or sand that would be attached to the top of the three poles. This was the anchor that we needed in case of Santa Ana winds.

I created an outline of what I was looking for in the driftwood/plank pieces of the signage and Steve took over from there. He trimmed them out and gave them a scalloped edge. Other than the “Tiki Tonight” board, they were painted in a chalkboard paint so that we could write our own event information on them at will.

We needed a test run to make sure that everything handled the way we expected, and we got it when Jim Cogley had a chance to perform at a party with some of our clients on the coast. Easy to set up and tear down.

So here they sit in our display area, ready for the November parties. One final set of signs with chalk boards is still in progress, but the hardest part is done and ready to go.

Thanks to Andy, Mal, Steve and Edgard for all their help and expertise. To all of our coach owners, we hope to see you at one of the Tiki parties in the near future.