With a humongous stuffed buffalo guarding the entryway to the club’s rally registration room on Monday morning, Sept. 15, attendees knew they were in the rugged Black Hills of South Dakota! And though the surrounding area received eight inches of snow just four days earlier, the weather for the five days of the rally was picture perfect: crisp in the morning, with sunny and warm days and not a thunderstorm or rain cloud in sight. 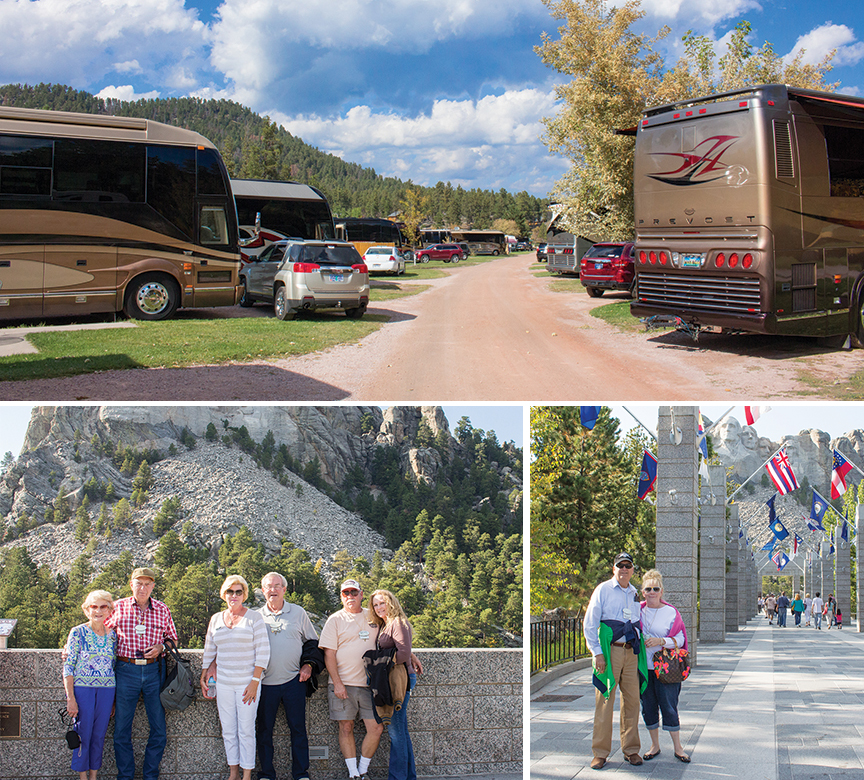 After the conclusion of registration, the club’s Board of Directors met to discuss the state of the club and its future. With this business successfully addressed, attendees enjoyed a restful afternoon where they were parked at the Mt. Rushmore KOA in Hill City before hopping the transportation bus bound for Rapid City and the beautiful home of Hosts Don and Linda Rydstrom.

The “First-Timers” welcome social took place in the hosts’ garage, where their exotic car collection proved to be a big hit. After introductions, photos and toasts, everyone moved into the pool house with the other rally goers to enjoy cocktails, elegant appetizers and the music stylings of two-time South Dakota fiddle champ Kenny Putnam and singer/songwriter Boyd Bristow. Kenny began touring and recording with The Red Willow Band in 1975. He was invited by the Smithsonian Institution in 1975 and 1976 to participate in The Festival of American Folk Life to demonstrate violin making, as well as play. Kenny toured and recorded with Roy Clark for more than seven years, appearing in The Grand Ol’ Opry, The Tonight Show and Hee Haw. He has performed on stages worldwide, including the JFK Center for the Performing Arts, Caesars Palace in Las Vegas and the Oktober Hall in Leningrad. Boyd Bristow is a veteran musician and star instrumentalist.

He has played with Blueberry Buckle, The Red Willow Band and Vince Two Eagles in Europe. He and Kenny are friends who perform together regularly. 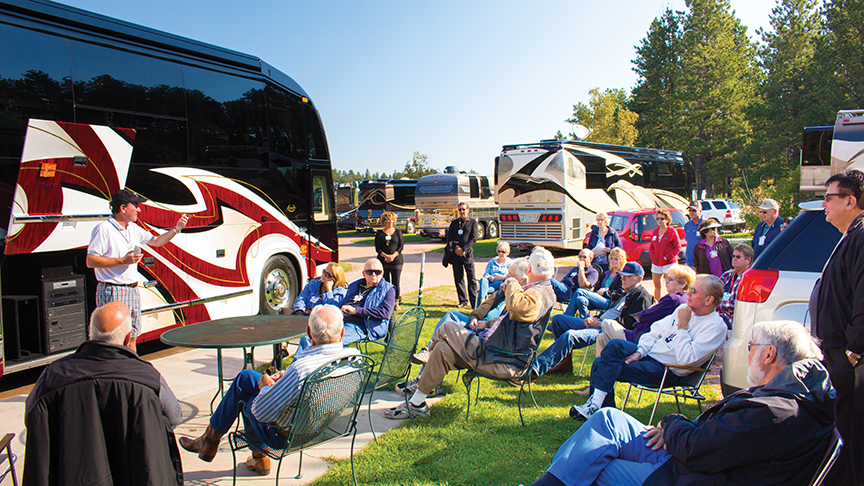 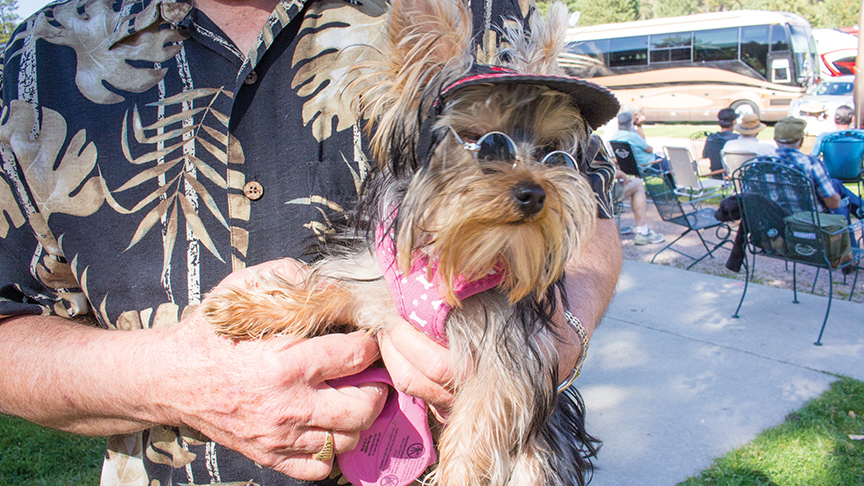 Tuesday morning began with a satisfying breakfast at the KOA’s on-site Ponderosa Restaurant. Attendees then gathered at Marathon’s display coach, stunning Show Coach #1220, to receive a company update from Marathon Coach President and Owner Steve Schoellhorn. Along with a string of entertaining jokes, Steve reported healthy sales and increased production plans, as well as reminding everyone about the 2015 and 2016 Marathon rallies and what fun they’re going to be. 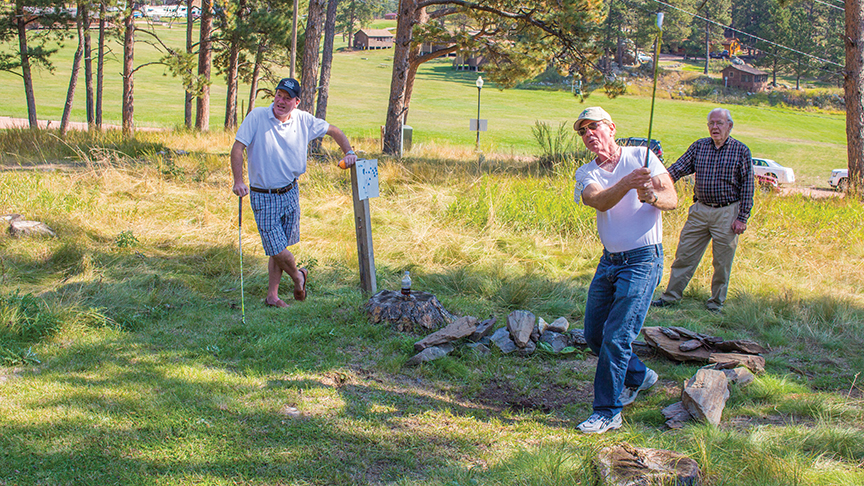 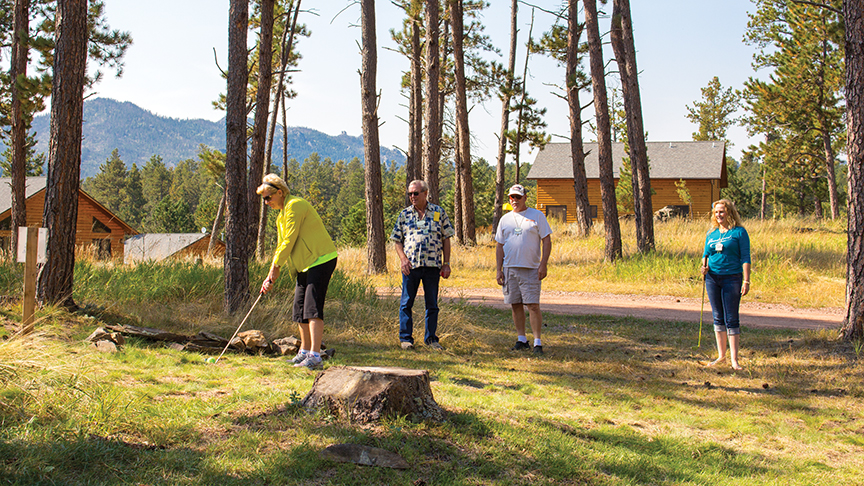 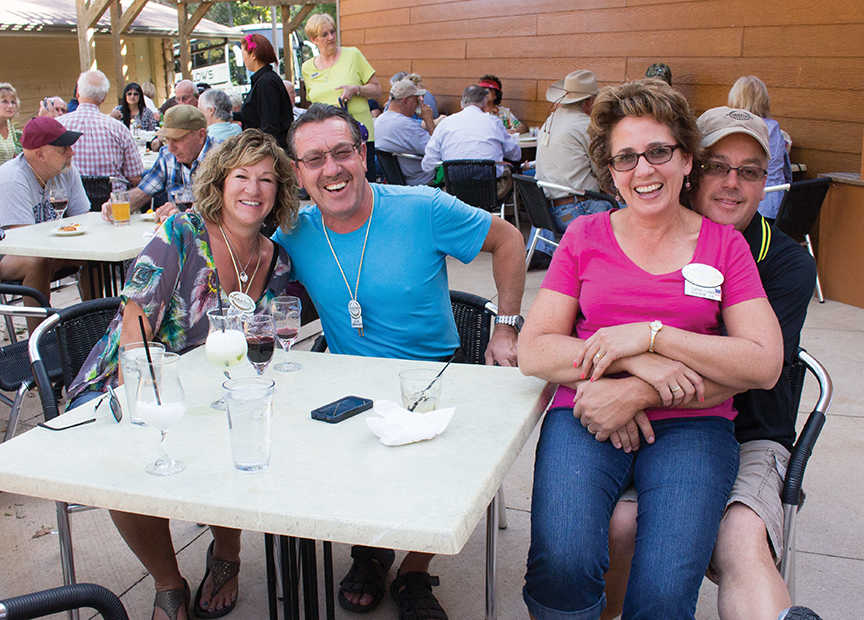 Next on the schedule was a fun and friendly “Tolf” competition at the KOA’s on-site “Tolf Course.” If you’ve never played, check it out sometime because this is a really fun game! Using a golf iron and a tennis ball, players try to sink the ball in an enlarged hole in the ground (just like in golf). First-timers John and Cathy Lamb, and returning rally goers Guy and Cathy Huta, were the foursome that swept first place, as well as the honorary comedic award. If you have yet to visit with either of these vivacious couples, be sure to catch them next time. You won’t be sorry.

With our transportation bus loaded just after 2 p.m., the group was ready to visit the Crazy Horse Memorial. After a warm reception by Crazy Horse staff, attendees were ushered onto shuttle buses and taken to the top of the memorial, to be “Face to Face on the Arm” of Crazy Horse. This was a powerful experience. Next was a Native American performance for our group on the terrace by Miss He Sapa Wacipi Win, whose English name is Sabrina Pourier. This talented 17-year-old told stories, sang, and demonstrated the “fancy shawl” dance. Marathon Salesman Rick Mount then led the group to the museum that houses Sitting Bull’s ceremonial pipe and bag, which he donated to Crazy Horse in 1997. Because Sitting Bull is considered the best-known Native American, this pipe may be one of the most important American artifacts in existence. Soon after, everyone enjoyed a private social on the terrace. Dinner festivities continued in a private dining room in Laughing Water Restaurant with a gorgeous view of the monument. The evening concluded with the “Legends in Light” laser light show, a moving account of the people and the monument of Crazy Horse. This special day at Crazy Horse—made possible by the late Ruth Ziolkowski (endearingly referred to by staff as “Mrs. Z”) and her wonderful family—will be remembered by attendees well into the future. On behalf of the club, thank you again!

After breakfast Wednesday, our transportation bus headed for the 1880 Train Depot in Keystone. Passengers enjoyed the one-hour scenic journey as the steam train delivered everyone to the Hill City Depot. Next on the schedule was wine tasting and lunch at Prairie Berry Winery. This family-owned winery has been making South Dakota fruit wines for more than five generations. And after sampling Red Ass Rhubarb, Buffaloberry Fusion, Lawrence Elk and Phat Hogg Red, many attendees decided to take wine home with them. But not before enjoying a glass of wine, gourmet pizza and the music of talented writer/singer/guitarist Hank Harris during lunch. 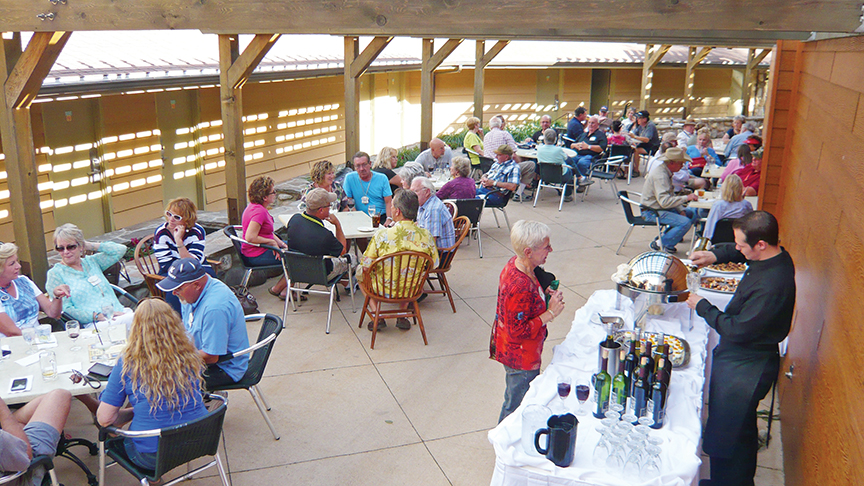 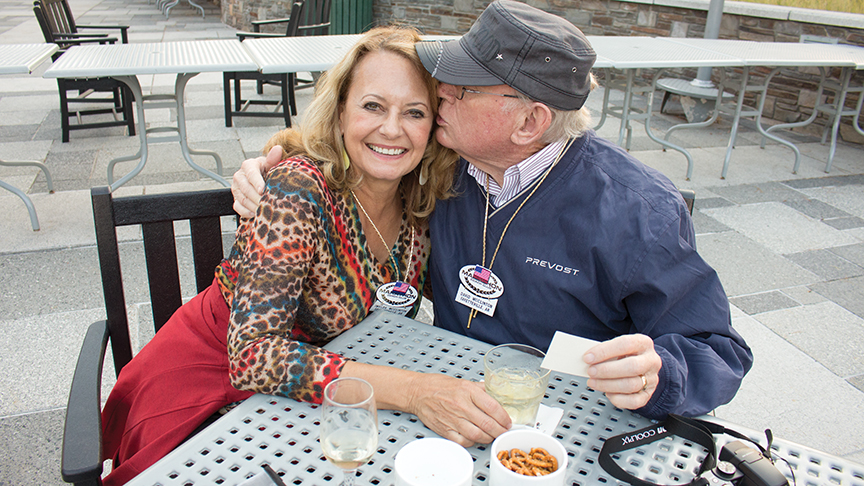 After a short retreat back at the campground, the group was ready for a night of dinner and dancing at Arrowhead Country Club in Rapid City. Upon arrival, a variety of tasty appetizers were passed while people mingled. At the conclusion of dinner, it was time to dance! “DD & the Fayrohs” were inducted into the South Dakota Rock-and-Roll Hall of Fame in 2011, and attendees quickly knew why. As they played “The Loco-Motion,” attendee Sandy Kincaid grabbed people from their tables and started an enthusiastic train of dancers throughout the ballroom. “Hang on Sloopy” proved to be another popular song. Be sure to watch for the video highlight on “The Maratime” website.

Thursday morning kicked off with a much requested “Tech Talk” session by Marathon Tech Support Manager Leon Snider. Soon after, our transportation bus headed to Custer State Park for buffalo-safari open-air Jeep tours. From buffalo to prairie dogs, the hills were teeming with wildlife. After the rides, attendees gathered for a social on the patio and dinner in the lodge’s Glass Elk Dining Room. Interestingly, the State Game Lodge was the summer White House for President Calvin Coolidge in 1927. It was also visited by Dwight D. Eisenhower in 1953.

The final day of the rally provided the perfect opportunity to explore individual interests. Because there was “free time” until mid-afternoon, some attendees took scenic drives on their motorcycles and in their cars, while others drove to Bear Country USA, Deadwood and Sturgis. And others just kicked back at their site at the beautiful Mt. Rushmore KOA. But by 3:45 p.m., everyone was off the bus and gathered at the entryway to Mount Rushmore, which proved to be an inspirational spot to spend the last day of the rally. Within 10 minutes of arrival, many were spotted touring the park with “TJ” vanilla ice cream cones in hand, which is said to be the original recipe from Thomas Jefferson himself. Prior to dinner in the Carver’s Café dining room, attendees were treated to a private social on the terrace under the watchful eyes of the presidents. This unique setting will be remembered. The final event in the park, the Evening Lighting Ceremony, took place at 8 p.m. in the outdoor Amphitheatre. 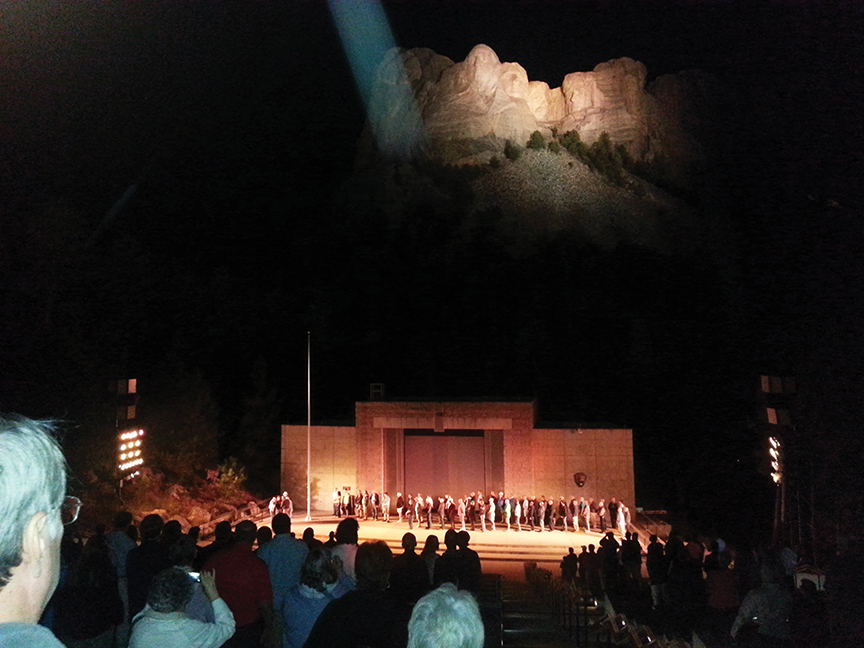 At the conclusion of the ceremony, all past and current veterans and active duty military were invited to the stage to introduce themselves and state their branch of service. The club was honored to have several of its attendees participate.

Is it grand adventure, food and fun that make a Marathon rally great? If so, this event fit the bill. But other elements, such as friendship and camaraderie, made this rally not just great but also something to remember and smile about. On Friday evening, as our bus pulled to its final stop, people could be seen sharing hugs and well wishes. The South Dakota hills did more than provide a gorgeous backdrop; it also provided the ideal landscape for connection. Thank you to Prevost Car and Marathon Coach for providing unwavering support to the club. A hearty thanks to Don and Linda Rydstrom for hosting and graciously inviting everyone into their home. And finally, thanks to the volunteers who made this the flawless event it was. Until next time, happy trails and safe travels.