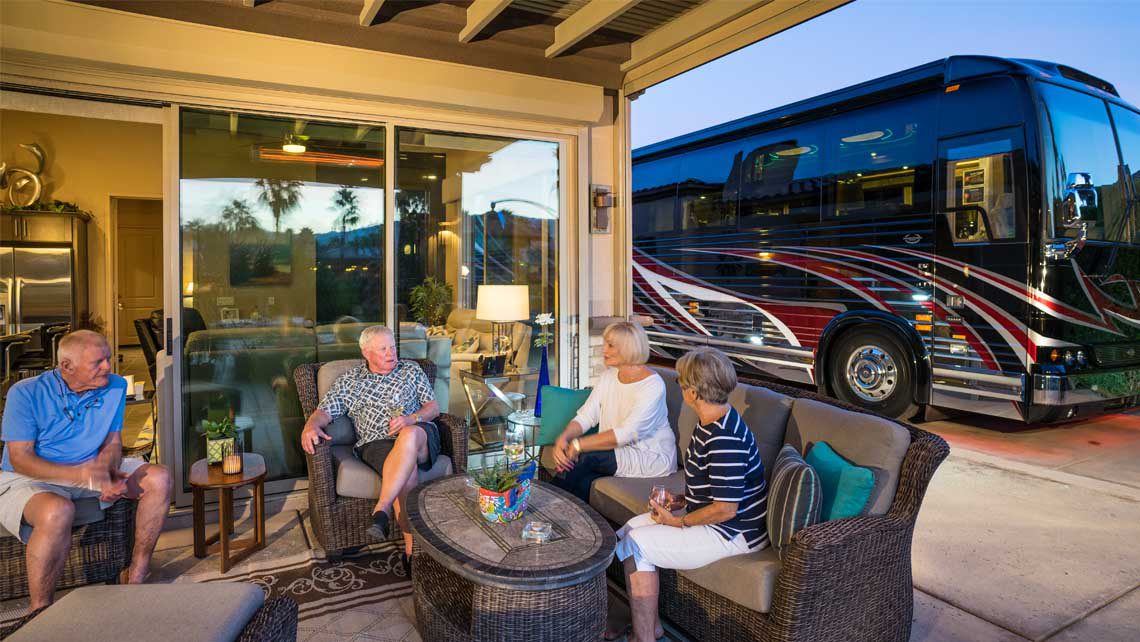 A Brief Look at the Possibilities

Die-hard sports fans know that tailgating is about more than burgers and beer; it’s the ultimate sporting social event. Marathon owners know that home is where you park it, and tailgating season creates some of the most interesting neighborhoods around.

Whether celebrating team pride or reveling in the party atmosphere, enjoy game day in comfort and style before, during and after the big game in a Marathon Coach. One Alabama fan elevated tailgating to an art. His triple slide H3 not only featured the crimson and white university colors, but also sported the words “Crimson Tide” in spectacular red lights across the front of his coach — red under-coach lighting completed the look.

Although some of his friends — both old and new — enjoyed watching the game on one of the two televisions in his salon, most chose to congregate outside the coach. Between his entertainment bay with large screen TV and built-in barbeque grill, plus a refrigerator and coolers, this Marathon quickly became a true party bus.

Whether you bleed college colors or hues of the NFL, all that matters are the people you surround yourself with, your team spirit and,
of course, a great menu.

From the breathtaking waterfront lots at Bluewater Key RV Resort in Key West, Fla., where one can jump directly from the patio area into the water, to the natural wonder of Hearthside Grove in Petoskey, Mich., where visitors enjoy cooking classes with local chefs in a state-of-the-art clubhouse theater, it’s easy to understand why people embrace the luxury RV resort lifestyle and all it has to offer.

Across the nation, each of these resorts has its own flavor of opulence. Take the StoneRidge Golf and Recreational Community nestled in Blanchard, Idaho, for instance. Located a stone’s throw from Spokane, Wash., the 650-acre golf and recreational community flawlessly combines sleepy, serene surroundings and an active, vibrant community. With two lakes, 19-hole golf course, six championship pickleball courts, tennis courts and so much more, their state-of-the-art Motor Coach Village is an ideal retreat.

Most coach owners know that when you’re on a grand adventure, every day’s a celebration. However, Premier RV Resort, located in Coburg, Ore., takes this idea seriously, celebrating summer with festivities and food. Tuesday brings 50-cent tacos at the Ducky Diner and an ice cream social in the afternoon. Friday features a Happy Hour with appetizers at the pool deck. Saturday is all about S’mores and Sunday features coffee and donuts. Plus, they host a BBQ every holiday weekend except Labor Day — that’s reserved for the chili cook-off. Yes, our neighbors know how to have a good time.

With eyes on the target, world class benchrest shooters Lou and Connie Murdica know all about profound concentration, aim and precision. However, these two award-winning sharp shooters keep their focus on what’s important — their family, friends and those around them.

Although both are respected shooters in their own right, many people recognize Lou from the product and event posters he graces at industry affairs such as the Firearms Industry Super Shoot, which is no surprise with a resumé like his. With titles such as “World Record Holder,” “Respected Benchrest Ace,” “Expert Product Tester” and “Sniper King” just to name a few, this Marathon coach owner and his wife often find themselves the center of attention. Last July was Lou’s second time entering the prestigious Sniper King competition and his second time winning the title.

Lou, who has been shooting competitively since the 1980s, attended the first ever World Benchrest Championships in Frejus, France in 1991. More than 30 countries participated, including Russia, Japan, Iran, New Zealand, Canada and Africa. “The people on my team were known to be wind shooters,” said Lou.
“Until the last day we were not considered a strong team. Then the wind started to blow hard. That last day, the day the wind came, we surpassed everybody. We did it and it was just the chance of a lifetime.” The USA team won the “2 Gun Teams” trophy.

Lou has also held world records in almost all yardages including 1000-yard, 200-yard, 300-yard, 600-yard and possibly the 100-yard — the process has been started and the information submitted. However, he’s not the only sharp shooter in the family. Although Connie laughingly refers to herself as a fair weather shooter, she won the 600-yard National Championship not long ago. “I’m not a big competitor; I’m a fair weather shooter. I’ve shot in nine degree weather and really hot weather in Arizona. It’s always for me, ‘Well, do I want to shoot today or do I want to shop?’ If I feel like shooting, I do. “

The sharp shooting dynasty doesn’t stop there: Lou and Connie’s granddaughter
Angelina has caused quite a stir in the bench-rest shooting discipline. Because there are no separate divisions for women or children, all entrants shoot in the same competitions. Imagine the surprise of some of the nation’s top shooters and Hall-of-Famers when a 10-year-old girl beat all but three of them, placing fourth in a 100-yard benchrest match in a Phoenix competition.

Lou and Connie often take their grandchildren on their travels. “We take our grandkids shooting,” Connie explained. “They stay with us in our bus and that really makes it easy and comfortable. It’s great to have a place to get out of the elements during the meets and a place close by to sleep at night. When you rent a hotel, it’s miserable. But with our bus, we can finish shooting and go right into the bus to relax and fix our meals. Everything is just easier when you have your home right there. We also never have to worry about whether they’ll have the feather pillows we like. Everything is exactly as it is at home.”

Forrest and Katie Griggs’ Marathon may look like the quintessential luxury RV from the outside, yet it soon becomes apparent that this is a place of magic, a home-away-from-home with a foundation of adventure — ballooning.

It began in 1985 when Forrest donated propane to a small hot air balloon event in their hometown. When he was offered a balloon ride in recognition for his donation, he deferred, instead offering it to Katie and their two-year-old daughter. “And that was it,” said Katie. “I crewed for the local pilot for six months and then found a used balloon for sale and was like, ‘Wow, I can do this! That was 30 years ago.”

After relocating from California to Lake Tahoe on the Nevada side, they found that having no jobs meant more free time than ever before. Enter Sushi, the custom-designed, oversized goldfish that is often seen swimming through the sky wherever the Griggs find themselves. With puckered lips and a three-story-tall tail, this hot air balloon is impossible to miss.

“We decided we wanted to travel and we knew that buying a special shaped balloon would pretty much get us into just about any balloon event we wanted,” said Katie, “so we used it as an excuse to wander. In the summertime, we’d be gone three to four months traveling from event, to event to event. They actually pay you to attend these balloon functions if you’re a special shape.”

The couple traveled extensively with the fish-shaped balloon for approximately six years, attending a NASCAR race or visiting Niagara Falls or the Grand Old Opry during off weeks. “We just had a ball,” said Katie.

“Our motorhome isn’t just a place to live when we’re traveling. It is a mode of exploration and experience,” explained Alice Nelson.

Meet Gary and Alice Nelson. The same sense of adventure that had this fascinating couple following an identical flight plan as Amelia Earhart, as well as spending quality time in Arctic waters, now has them reveling in cross country dry-camping adventures.

“A favorite activity in our coach is going to where there is a big blizzard, parking and enjoying the outdoor activities,” said Alice. “Even with lots of wind and piles of snow, the coach is comfortable and the camping is not crowded.”

Because their enthusiasm for adventure and love of cold weather, camping often takes them to more remote areas. In addition to the three 120-volt toekick heaters, the Nelsons have five heaters upstairs, with another five in the underbelly, plumbed into the fuel-fired heating system, thus ensuring their coach will be warm and ready regardless of the conditions. And there’s no need to worry about disturbing their neighbors no matter how close the quarters, how chilly the weather or how early the morning. With a quieter generator and engine, the Nelsons can start their coach, warm it up and get it on the road before dawn without waking the campers around them.

So just how do these two find themselves at the frozen Timberline Lodge in Oregon or following the Natchez Trace Parkway for hundreds of miles? “When Alice and I plan trips, we start with a mission, any mission. It may be to see a space shuttle launch, explore Newfoundland or go storm watching,” said Gary. “Then we start filling in what to do on the way there and on the way back. The adventures emerge in that filling-in process. It seems to turn out that our best adventures were not necessarily the big missions — though we do enjoy our selected destination activities — our best adventures were often the discoveries along the way.”