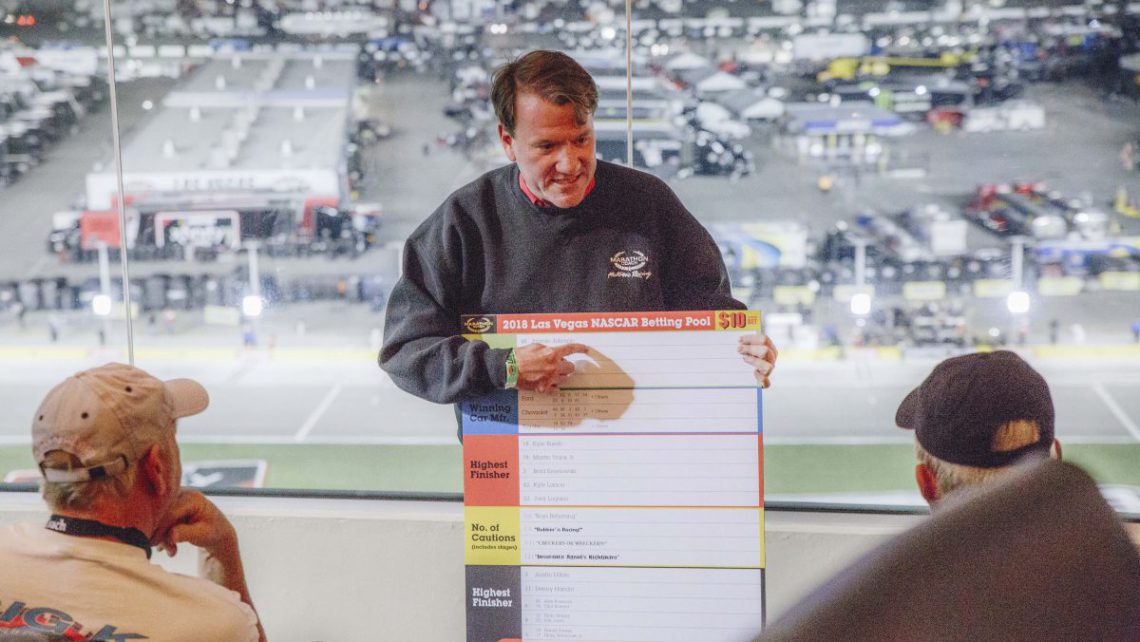 March 1-4 brought many Marathon coach owners together for an adrenaline-boosting, heart pounding adventure: NASCAR’s Pennzoil 400. Camping at the Las Vegas Motor Speedway, these race-loving friends experienced quite the exciting ride on and off the track at the Marathon Coach Las Vegas NASCAR Rally.

One of the things that sets NASCAR apart from other sports is how accessible these driving stars truly are, especially with this VIP experience. Marathon coach owner Jimmie Johnson, who began his NASCAR career in 2000 and is one of only three drivers in the history of the sport to win seven cup championships, provided an interview and Q&A session to the intimate crowd within the confines of Marathon’s base camp. Up and comer Chase Elliott did the same, answering questions not only about his career, but also about his new Marathon coach and his famous father, Bill Elliott. Other interviewees included Vice Chairman of NASCAR Mike Helton, EVP/Chief Racing Development Officer of NASCAR Steve O’Donnell and NASCAR Senior Vice President of Competition Scott Miller.

And then there’s “The King”: There’s a reason the moniker has stuck. Probably NASCAR’s all-time great is Marathon coach owner Richard Petty, who dominated NASCAR from the late fifties to the early nineties. People were drawn to him the moment he entered the tent Saturday evening, and he greeted each person warmly, wrapping an arm around him or her as if they’d been friends for decades. After a few photos and countless hugs and handshakes, the man in black – sporting his signature Stetson hat, dark sunglasses and logoed bomber jacket – slipped out the door as quietly as he slipped in.

Those who took advantage of the Neon Garage Tour were able to see and occasionally meet additional NASCAR drivers and crew members. Remarkably accessible, attendees were able to peruse the many powerful race cars up close and personal as the vehicles were prepped for inspection. Some rally goers bumped into drivers, scoring autographs in the process, while other reveled in views of the garages and more.

On any given day, when it came time to head to the track, whether it be for series practice, qualifying or the big race, everyone met in the luxury suites where the snacks were flavorful, drinks flowed freely and the view was unbeatable.

“I’m damaged goods now,” said Ryan Huta, son of coach owners Guy and Cathy Huta. “How can I go to a NASCAR Race again, unless it’s with Marathon Coach and Prevost? What a red carpet experience!”

The stakes got even higher as Marathon Owner and President Steve Schoellhorn circulated with a wager board and slips with driver information were randomly passed out, allowing both the NASCAR-knowledgeable and the novices alike to get in on the gambling action.

The third generation of Huta men, Dominic Huta and Max Andersson, grandchildren of Guy and Cathy, embraced all of the experiences that presented themselves.

When asked, Max knew exactly which were his favorite moments: “When our drivers from the draft won the race and we got all the swag, prize money and the ride in the pace car. What a fun weekend!”

“I loved when we won the race games and we got to drive on the racetrack in the pace car,” shared Dominic. “I also liked all the food!”

And he wasn’t the only one who enjoyed the food. With daily breakfast hot off the griddle, a barbecue dinner, steak and lobster and more, every day was a celebration of life, luxury, NASCAR and most importantly, friends.

Dubbed “Las Vegas Night,” Saturday evening was sponsored by IncredibleBank. “Since we started financing coaches a couple years ago, it has been important for me to get involved with my customers in their communities,” said IncredibleBank National Lender Brad Mason. “It just so happens their communities move from rally to rally so getting to experience these events firsthand is important. It doesn’t hurt that we have a lot of fun at the same time.”

Of course more than food was served up at dinnertime, so was entertainment. The Tony Marques Band was a hit, as was the music styling of Douglas “The Crooner” Roegiers.

“Wow, what a classy event,” said IncredibleBank National Market President Ellie Reineck. “From line dancing with a live band the first night to high kicking with Douglas Saturday night, the entertainment was fantastic. I really enjoyed getting to know the customers who have been loyal to the Marathon brand for years and years and learn from them what makes the RV lifestyle so special. I can give you one word…community!”

Although rally goers had revved their own engines during the highly competitive kart racing Friday at Pole Position Raceway, come Sunday’s Monster Energy NASCAR Cup Series chase, everyone was in it together.

Feeling the excitement as one, hearing the motors race by, it was more than tires on asphalt – it was family. With Marathon coach owners Jimmie Johnson, Chase Elliott, Kevin Harvick, Denny Hamlin and Kurt Busch in it to win it, the race was quite the spectacle. And for many it was also brutal: Although Kevin led 214 of the 267 laps, Kyle Busch led laps 225-230. However, Kevin came back strong and led the rest of the way, successfully taking the checkered flag. After enjoying the “suite life,” and celebrating with a post-race barbecue, attendees put their own serious horsepower to work and headed out for the next adventure.

“What a fantastic experience with my son, grandkids and rally participants,” said Guy. “Team Marathon really pulled out all the stops!”

Special thanks to Prevost Car, IncredibleBank and rally attendees for their support. 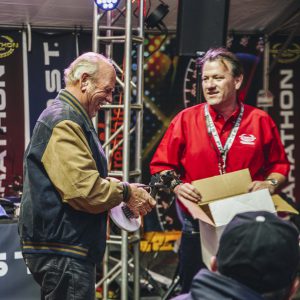 Watch the recap videos below.