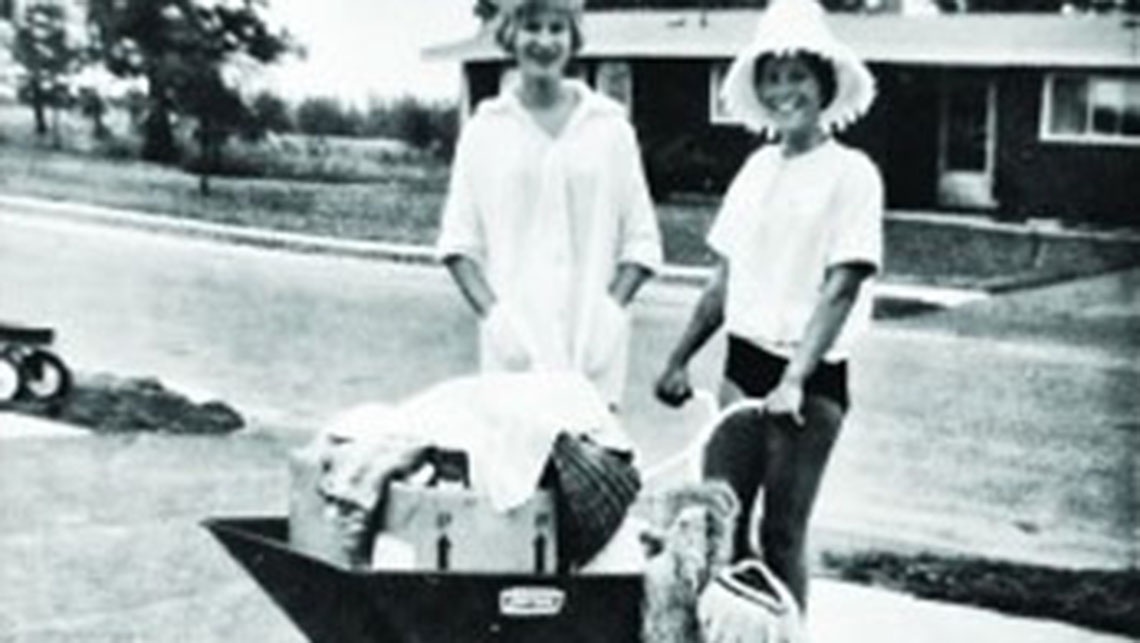 Fast friends from the time they were “Air Force Brats” living on base in Washington State with their families in the early sixties, Connie Portz and Betty Siegrist have been enjoying shared adventures for decades. “Our dads were stationed at Geiger Field in Spokane, Washington,” said Connie, “and there was a fairly new housing area that we got to move into, both of us. I remember my parents being excited because over all the years, they had lived in some pretty crummy government housing. This was new and I remember everybody was very excited about it.” Although the two attended different high schools, with Connie attending an all-girls Catholic high school while Betty attended the local public school, when it comes to exactly how they met, there’s a bit of debate.

“The street was such that all of our houses were close together and we weren’t allowed to put up fences,” explained Connie. “In the winter, everybody would put their hoses out in the back area, creating a skating rink that was fabulous. We skated all winter long.” Betty quickly put this theory to rest explaining that she didn’t have skates, although she did “shoe skate.” She thought perhaps they met at the local teen club. “Airforce bases in those days took care of the kids,” Betty recalled. “They set up teen clubs. They played music for teenagers to dance to and had a snack bar. They even provided transportation there. It was a great place to hang out.” However fantastic this teen club was, apparently this wasn’t how they met, either. “None of that rings a bell for me, so maybe I didn’t do that,” said Connie.

No matter how they officially met, this longstanding duo knows they were juniors in high school when they became fast friends and budding entrepreneurs, starting a house cleaning business together. “When you lived on the base and were transferred or you left,” said Betty, “you were required to leave the place spotless. They had what’s called a white glove inspection, where they literally put on white gloves and rubbed their hands over things to see if they were clean enough. People who were leaving were busy trying to pack for the movers. They didn’t want to mess with cleaning, so they hired us. And that’s how we got started.” The duo cleaned every inch of these houses, including the ovens, bathrooms, windows, walls and patios for $35 per house split between them. They must have done a great job, because before long, they were making $50 per house.

After their families moved from the Airforce base, they fell out of touch for about 15 years. Having both married in 1966, Betty to Fred Siegrist and Connie to Ed Portz, they reconnected when their kids were young. “Our fathers got us together,” Betty explained. “When my dad moved to Eugene, he saw Connie’s dad at the bank. So he called me and said, ‘Guess who I saw today?’ And so our dads kept pestering us to get together, to see each other’s kids and whatnot. Finally we did.” However, busy lives sent them in separate directions once again. “With kids in different schools, we lived in different ends of Eugene, and even though we kind of struck up our friendship again, we really didn’t see each other,” said Connie. “Then one day, I was reading the newspaper and saw the obituary for Betty’s dad. Somehow I remembered that her parents lived on Shady Lane in Springfield. So I just got in my car and drove down Shady Lane, not sure which house it was.”

When she spotted a sweet Porsche Cayenne SUV in a driveway, she didn’t hesitate to knock. Fred and Betty are car buffs, as are Ed and Connie — another nice connection, especially for the husbands. “So I knocked on the door,” remembered Connie. “She was in her grubbies cleaning this house and I said, ‘Well, can you take a break? I’ll take you out to lunch.’” Soon after this reunion, the friends realized they had more in common than a shared past and dedication to family — they were both Marathon coach owners. “To me, the comical part about our conversation catching up is about the motorhomes,” Connie commented as she recalled the moment. “‘Oh yeah. We have a motorhome.’ ‘Oh, we do, too.’ ‘Oh really? Where do you go and what do you do?’ And finally the big question: ‘Well, what kind is it?’ Well, I’m always somewhat hesitant to say it’s a Marathon. First of all because most people don’t know the difference and second, I don’t want to sound like ‘We HAVE a Marathon.’ You know, that kind of thing. So we were both somewhat hesitant. Then we said, ‘We do, too!’” After the discovery, they started talking Marathon Coach Club and rallies, and plans of future adventures together started taking shape.

“As I reflect upon our friendship,” shared Connie, “what makes it special as well, is that growing up in military families who move around a lot makes keeping friendships over a long period of time a challenge. Each of our father’s assignments lasted two to three years and everyone we became friends with were also on the move. That said, reconnecting and being able to pick up where we left off is unique.” The first rally they attended together was “Extraordinary Oregon” in 2009. “At the time,” said Betty, “we weren’t necessarily driving in tandem, because we were coming from different areas to meet them, because Fred and I still lived in Brookings, Ore. But even now, we have a place in Southern California and Connie and Ed have a place in Tucson, Ariz., so we often start from separate areas.” Of course, this now foursome of friends didn’t stop at “Extraordinary Oregon.” Their shared love of Marathon rallies and adventure have them traversing North America and seizing all types of interesting opportunities.

“Marathon puts on the nicest rallies of any that I’ve gone to,” Betty continued. “There are often times that Marathon gets us into places that either you didn’t know was something special to see or that you might not be able to get into on your own. But Marathon has everything organized and reserved early. That part’s really, really nice.” Although Betty enjoyed the Newport Beach and the Las Vegas rallies and Connie has about four rallies that really stand out in her mind, they both agree that last fall’s Québec City rally “was incredible.” It’s true that the two couples’ shared adventures always bring them together in the end, however, they have very different travel styles: Fred and Betty meander while Ed and Connie have a greater focus on miles covered over a set period of time. “It took us a month and a half to get home from Québec because we were on the East Coast and wanted to visit some places we hadn’t been to,” said Betty. “We didn’t take freeways. We drove all the back roads and it was really, really fun. We saw so much incredible country as we putted along. We’d never done that before, but it was a fun trip, a whole new way to travel for us.”

Although Connie and Ed did make a stop in the small town of Three Rivers located between Québec and Montreal, they otherwise stayed to the route, a fast track home. “We had a former exchange student that stayed with us about 10 years ago,” said Connie. “We visited with her, her husband and their two little kids. We also enjoyed visiting their Belgium pastry shop. Otherwise, we could have done some sightseeing, but were more like the horse heading to the barn.” Connie and Betty both believe that embracing the scenic route is a process, one directly correlated to retirement. “I think as one gets closer to fully retired, you take a step back from traveling longer hours,” said Connie. Betty agrees. “When we first started traveling, we were both working,” recalled Betty. “And when you work, the object is to get to your destination so you have time there to enjoy it. Then, you have to hustle back home. I believe as you retire, it becomes more important that the trip itself should be as fun as the destination. And so, we’ve slowed down a lot.” But, whether couples choose the scenic or the direct route, it appears that motorcoaching does make the heart grow fonder. “Part of the reason motorhoming’s been so interesting is because you spend so much time in the vehicle with your spouse,” explained Connie. “I don’t really know anyone who RVs who doesn’t have a strong marriage. It gives you uninterrupted time to visit and reconnect.”

Of course sometimes it truly is about the destination. Many rally attendees know that Connie’s husband, Ed, is an avid shooter, leading trapshooting activities at both the 2013 Coeur d’Alene and 2015 Las Vegas rallies. “One of the reasons we continue to motorhome is because of Ed’s trapshooting,” said Connie. “The nice thing about it is we attend different rallies as well as trapshooting competitions. We get to stay right on the grounds in a nice motorhome. It’s like our second home on wheels. It saves us from staying in a motel or hotel and having to drive to the event each day. Every competition is usually a hundred targets at a time. And since Ed stands for all of that, he’s able to come in immediately, relax on the recliner and put his feet up while waiting for the next competition.”

Apparently Ed isn’t the only one who likes to put his feet up and relax while out and about. Betty’s family members tend to appreciate the creature comforts that owning a Marathon affords. She and Fred enjoy taking their Marathon coach on family camping trips. “We meet our kids at places they camp,” said Betty. “And it’s always a hoot because, of course, they’re in a tent or cabin, and where do you think everybody ends up?” “One year, we met both families over the Fourth of July in Eastern Oregon,” explained Betty. “They were tenting and our daughter had a little one, maybe a year old. It was so hot that nobody could sleep. So we’d bring the baby in and everybody would end up sitting in the motorhome with the air conditioner on so they could cool down. That trip was fun, but the motorhome was a godsend since it was close to 100 degrees — just too hot to do anything.”

Although the weather was much more agreeable at last summer’s Glacier National Park visit, there was still plenty of family togetherness in the Marathon. “We were able to park directly across from the cabin where our son, daughter-in-law and their two children were staying,” said Betty. “The cabin worked beautifully. The boys were over every five minutes, ringing the doorbell because they wanted to talk. It was really lovely and we all enjoyed it.” Whether family or friend, old or new, owning a Marathon is an avenue for people to connect. “One of the things that Fred and I have noticed is that as one retires,” said Betty, “there are fewer avenues for meeting people and making new friends. Having a motorhome in general, and a Marathon in particular, has been a great way to make friends from all over the continent. We now have friends from England, Canada, Michigan, Ohio, Washington, California, South Dakota, Colorado, Texas and on and on.”

Their Marathon coaches were the spark that reignited Betty and Connie’s friendship, causing these two, and their husbands, to actively spend time together in shared escapades across North America. From high school friends cleaning houses, to the exceptional women leading lives of adventure, there’s no doubt that this duo fully embodies the contemporary motorcoach lifestyle.