Forrest and Katie Griggs’ Marathon may look like the quintessential coach from the outside, yet it soon becomes apparent that this is a place of magic, a home-away-from-home built on both adventure and love. 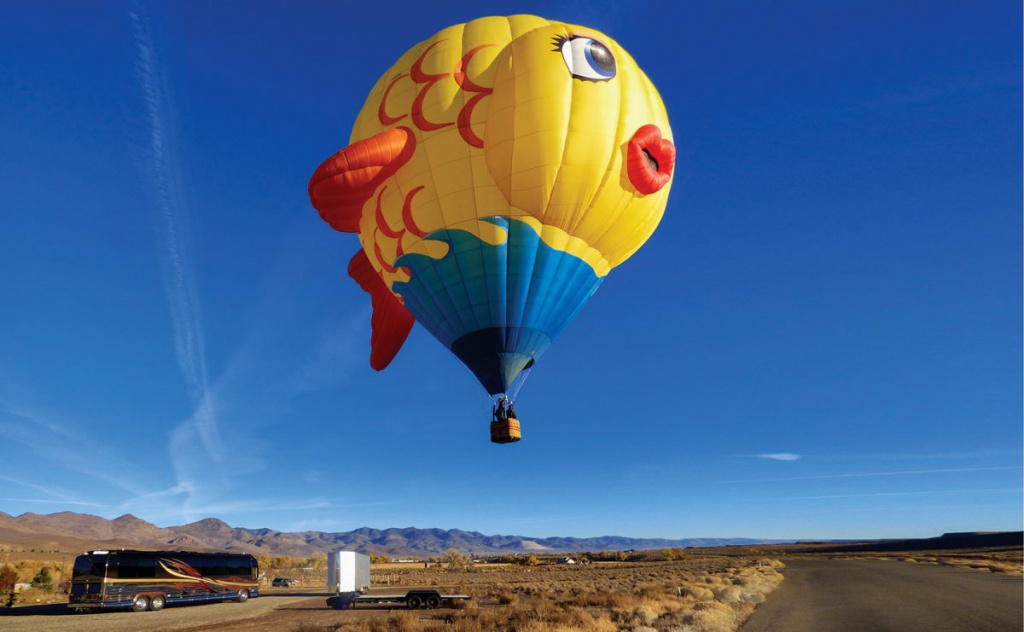 Adventure comes standard, but today the love comes in the form of kittens — not just any kittens, endangered kittens from a feral cat. “The mother had abandoned them, and so we were afraid that they might not make it,” 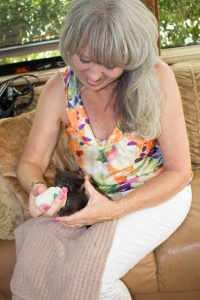 Katie explained as she bottle fed one of the impossibly small animals. “Instead of just taking one as I intended, I had to have two. I figured they would keep each other company. Plus, I just didn’t know if they were going to make it as they were so fragile.” When the Griggs adopted the kittens, they were told the two young cats were hypoglycemic and dehydrated, and that their chances of survival were minimal. “We just took them home and started feeding them,” said Katie. “It takes time, but they’re just so fun, happy and healthy now.” These new additions to the family aren’t the only ones who enjoy the motorcoach lifestyle.

After Forrest and Katie married in 1980, her father invited them on a road trip in the family’s 1978 Barth. Although the Griggs were hooked immediately, they found that the trip provided quite a bit of family togetherness, but not very much privacy. “That’s when we decided we really liked traveling with them,” said Katie, “but knew that we didn’t want to travel ‘with’ them. We wanted to be in our own motorhome.” They bought their first motorhome, a Class C, in 1982 — a 22-foot with a wet bath. “It was all one area,” said Katie. “It was pretty small. We took our kids and we had a ball. And we just kind of gradually grew from there.” They grew into a Southwind, a fifth wheel, a Beaver, a Featherlight and a Country Coach before they found their home in Marathon. “We had been looking at Marathons and dreaming about Marathons for a long time,” explained Katie. “In fact we’ve been talking to our salesman since 2006. This is our first Marathon and we’re pleased with it. It’s beautiful, by far the nicest motorcoach we’ve had.” “Because I’m the driver,” said Forrest, “I like that it drives so much better than any other coach we’ve ever had. It drives like a Suburban going down the road. Even when I hook a trailer to it, it still drives like a Suburban. It’s just really nice.” 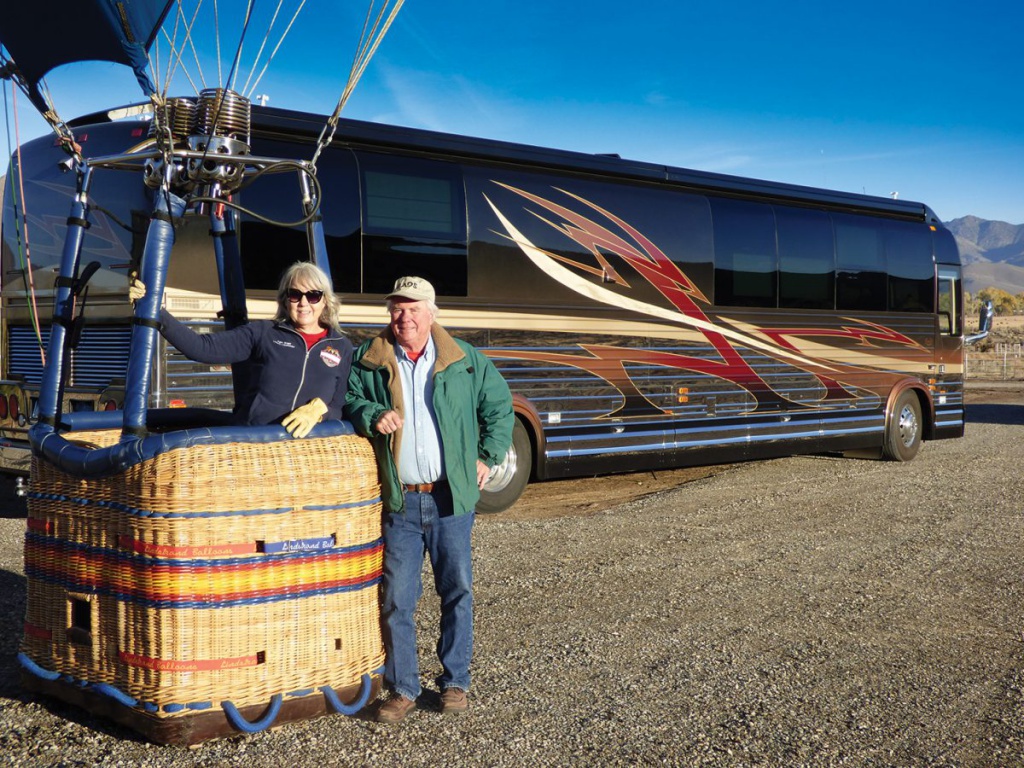 Also born from the 1980’s was another passion — ballooning. It began in 1985 when Forrest donated propane to a small hot air balloon event in their hometown. When he was offered a balloon ride in recognition for his donation, he deferred, instead offering it to Katie and their two-year-old daughter. “And that was it,” said Katie. “I crewed for the local pilot for six months and then found out about a used balloon for sale and was like, ‘Wow, I could do that!’ And that was 30 years ago.” After relocating from California to Lake Tahoe on the Nevada side, they found that no jobs meant more free time than ever before. Enter Sushi. “Sushi” is a custom designed, oversized goldfish that can often be seen swimming through the desert sky wherever the Griggs find themselves.

With puckered lips and a three-story tall tail, this hot air balloon is impossible to miss. 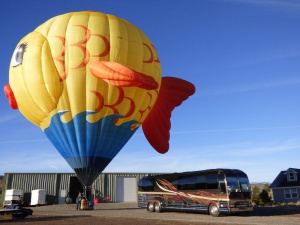 “We decided that we wanted to travel and we knew that buying a special shaped balloon would pretty much get us into just about any balloon event we wanted,” said Katie, “so we used it as an excuse to travel. In the summer time, we’d be gone three to four months traveling from event, to event, to event. They actually pay you if you’re a special shape to attend these balloon functions, but it really just pays for the diesel to travel around in the motorhome.”

The couple traveled extensively with the fish-shaped balloon for approximately six years, attending a NASCAR race or visiting Niagara Falls or the Grand Old Opry during off weeks. “We just had a ball,” said Katie. Balloon enthusiasts from around the world are drawn to the Albuquerque International Balloon Fiesta. “Katie and I have been going to that Fiesta since 1989,” explained Forrest. “Back in 2006, we decided that we liked the Albuquerque area so much that we ended up buying an acre lot in Corrales, west of the Rio Grande.” 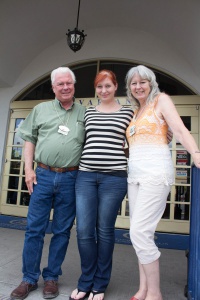 The original plan was to build a vacation home there. After installing a water and electric supply as well as a septic system, instead of a cozy vacation home, they found they created the perfect motorcoach retreat for friends and family. “During Fiesta,” said Forrest, “our property fills with anywhere from nine to 11 motor-homes, so it becomes a mini RV park. In the morning, we go ballooning and then we all get together to fix a nice meal.” With a commercial griddle at hand, Forrest is known for both his extensive breakfasts featuring his specialty, blueberry pancakes, as well as his evening Benihana-type cooking style. “I will cook the steaks, shrimp, scallops or whatever we’re cooking that night on the griddle, as well as the fried rice,” said Forrest. “I also stack onions into volcanoes. After I pour in the ‘magic volcano stuff,’ I’ll stand back and my assistant here will use the butane barbeque lighter. Then Whoosh!” After a round of fortune cookies, hosts and guests either return to the festival site or stay to enjoy the views. “If Katie doesn’t have a blow in the evening, we sit around and watch the balloon field,” explained Forrest. “We can watch all the lights come on from Sandia to downtown. It’s got a fantastic view!” 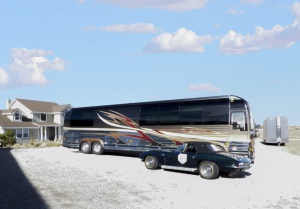 Forrest recently viewed the world from the couple’s classic Corvette with a cross country adventure in the Great Race spanning from St. Louis, Mo. to Santa Monica, Calif. This classic car race isn’t so much about speed as it is precision. With a list of 220 to 250 instructions and four to seven checkpoints per day, the goal is to follow the outlined course exactly. Every second off from the perfect time results in a penalty point. The GPS ban and taped over odometer makes it even more exacting. “The Great Race was very challenging,” said Katie. “This was not a race for speed, it was more a race for endurance for both the car, the driver and the navigator. We were happy to have just finished the race, especially as many did not. It was eight days in some of the hottest parts of the country on some of the hottest days of the year. But we made it, and we had some fun along the way.” Whether they’re visiting with their three children or five grandchildren — the youngest arriving last September — attending rallies, hosting other adventure seekers at their private oasis or relaxing inside with the cats, it’s obvious these two truly know how to live life right. 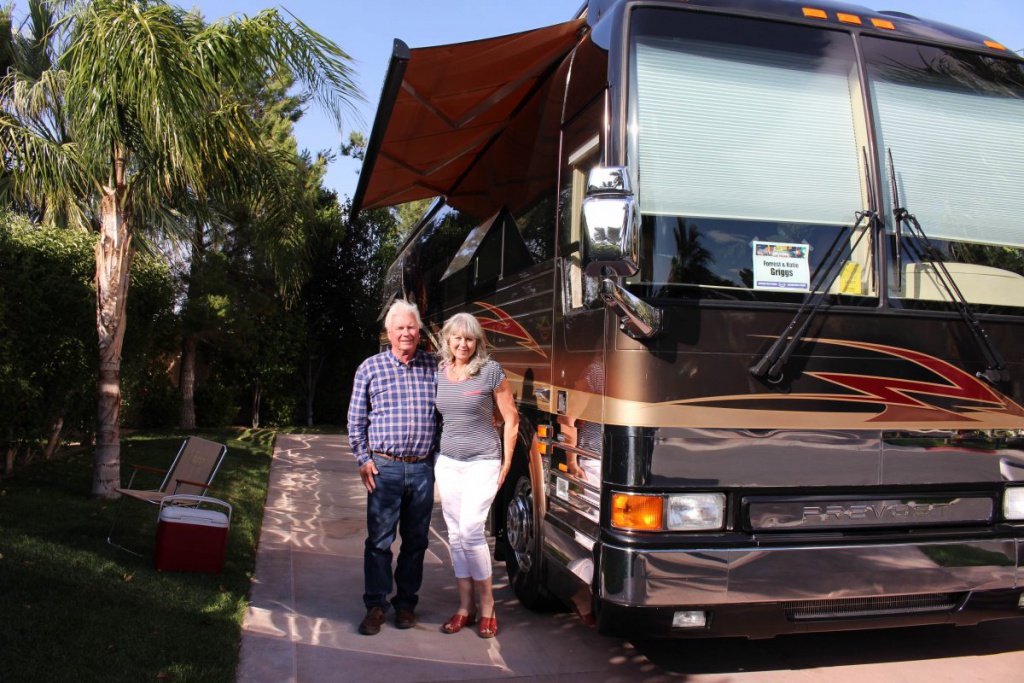