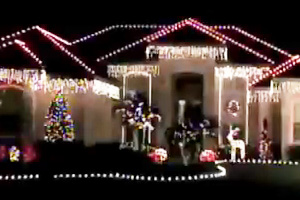 Those who come to visit us during the month of December know we’re a festive group. We embrace the holidays as a team with our decorations and annual Christmas dinner. However, when you walk the halls, you may see many of us spreading cheer with mini trees on our desks and tidings of goodwill throughout our email. One holiday enthusiast who tops Marathon’s list of Christmas enthusiasts is Preston Green.

Meet Preston. Many of you know him as a personable Marathon sales representative at our Florida location; but did you know that he’s quite the expert when it comes to Christmas lights? Preston has been causing traffic jams in his neighborhood since 2006. Although we hear he was featured on the local news, his real claim to light fame is when the founder of the Trans-Siberian Orchestra, Paul O’Neill, watched a video of Preston’s house featuring one of the orchestra’s songs. He was so moved by the video, he immediately went to his car, autographed a show program and sent it with his paint contractor to deliver to Preston.

Even though Preston’s received quite a bit of attention with his lights, he says he’s most fond of simply watching cars line up, seeing firsthand the joy his lights bring to both children and adults alike.